Does the Future of Gaelic Lie in Young People’s Hands?

Scotland is currently preparing to enjoy Hogmanay, one of the distinctive highlights of the country’s cultural and social calendar. We thought we would mark the occasion by reprising a piece of ScotCen research unveiled during the year that looked at attitudes towards another distinctive feature of Scottish life and culture – the Gaelic language.

The research, undertaken for Bòrd na Gàidhlig, was based on data collected (via the ScotCen panel) as part of the 2021 Scottish Social Attitudes (SSA) survey. Many of the questions had previously been asked on the 2012 SSA so as well as giving us a snapshot of where attitudes stand now, it also created an opportunity to establish how attitudes towards Gaelic have changed during a decade when both Bòrd na Gàidhlig and the Scottish Government have been endeavouring to support the language.

These efforts appear to have had some success. For example, since 2012, the proportion who think that Gaelic should be taught in schools every week increased from 38% to 55%. At the same time, the percentage who think that too little is currently spent on promoting Gaelic rose from 17% to 22%.

Meanwhile, as many as 30% now claim to be able to speak the odd word in Gaelic, double the proportion a decade ago.

However, if what some view as a ‘dying’ language is to have a long-term future, the language will need, above all, to be supported and used by today’s younger generation. Not only do they represent the future, but they are a generation whose formative years saw the passing of the 2005 Gaelic Language (Scotland) Act and the launch of BBC Alba in 2008. If such initiatives have had an impact, it should above all be apparent in Scotland’s newest adults.

Younger people show more signs of wanting to learn and improve their Gaelic than older age groups. Around six in ten (59%) of those aged 18-29 who cannot speak the language fluently want to speak Gaelic better than they do now. In contrast, only around a quarter (24%) of those aged 70 and over express that aspiration.

Accompanying these views is a resounding tendency among younger voters to feel that Gaelic is important to Scotland’s cultural heritage, a view that is not shared to the same extent by older citizens. As Figure 1 shows, nine in ten (90%) of those aged 18-29 feel that the language is either ‘very’ or ‘fairly’ important in this way, whereas only six in ten (60%) of those aged 70 and over take that view. 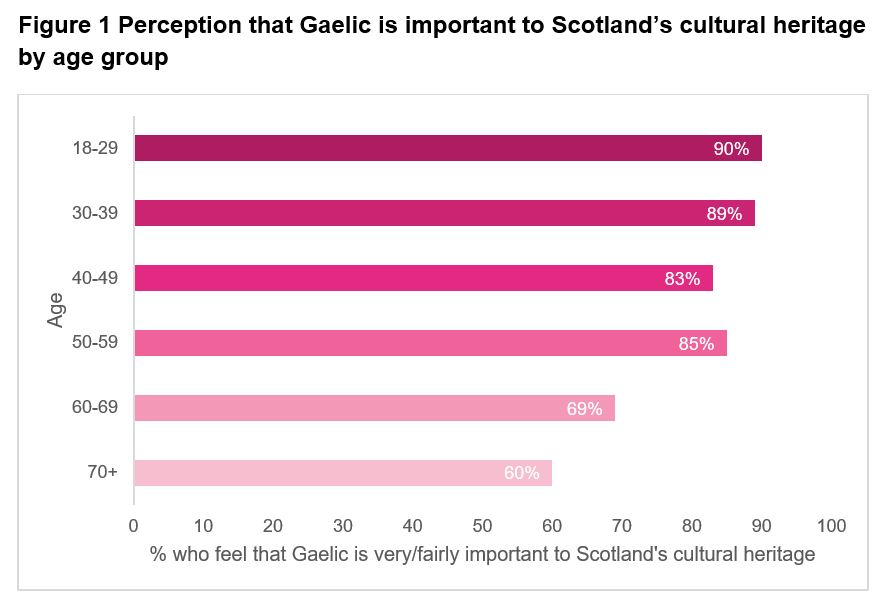 However, young people’s more favourable attitudes towards Gaelic is not accompanied by more widespread knowledge. Just 30% claim they can speak at least the odd word, exactly the same as the proportion as among adults in Scotland as a whole. That said, this contrasts with the position in 2012 when younger people (8%) were only around half as likely as those aged 30 and over (17%)  to claim to have some ability to speak the language.

Meanwhile, young people are more pessimistic than their older compatriots about the future of Gaelic. As many as 70% of those aged 18-29 think that fewer people will be speaking Gaelic in 50 years’ time, whereas less than half (44%) of those aged 50 and above feel that way.

In the meantime, ‘Bliadhna Mhath Ùr’ when it comes!

This blog is co-authored by Dr Fiona O’Hanlon, The University of Edinburgh

Researcher at the Scottish Centre of Social Research