Back to the Ballot Box: Prospects for the Local Elections

Just twelve months after last year’s Holyrood election, Scotland goes to the polls again this week. This time the ballot is for all 1,226 seats on Scotland’s 32 councils. The electoral system, however, is very different.

The local elections will be held using the Single Transferable Vote (STV) system of proportional representation that was first introduced in 2007. Under this system voters are invited to rank the candidates in their ward in order of preference – expressing as many or as few preferences as they wish. Nearly all wards in Scotland elect three or four councillors. In a three member ward, to be elected a candidate needs by the end of the counting process to have secured one more vote than 25% of the total, while in a four member ward one more than 20% is required. Any candidate whose total of first preference votes exceeds the quota is automatically elected.

However, if fewer than the number to be elected achieve that target, the ballot papers of the candidates with the fewest votes (and any votes won above the quota) are transferred in accordance with voters’ second and subsequent preferences until the requisite number of candidates have reached the quota. The result is a system that is roughly proportional to votes cast, but one where the outcome depends on the pattern of transfers as well as the distribution of first preferences.

The last local elections were five years ago, in May 2017 (see Table 1). They were held after the then Prime Minister, Theresa May, had called a general election but before the parliamentary ballot was held in June. The Conservatives were doing well in the polls, including not least in Scotland. The party nearly doubled its share of the first preference vote to 25%, its highest local election share since 1982, and a result that presaged the party’s success on winning 29% of the vote (and 13 seats) in the general election in June. 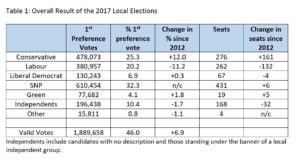 Consequently, the party is having to defend a high baseline – and its task has not been made any easier by the political maelstrom that has surrounded Downing St since the Owen Paterson affair and ‘partygate’ have hit the headlines. As Table 2 shows, the party’s average standing in the polls in the last couple of months has been as much as ten points down on the position shortly before the 2017 local elections. Indeed, it appears that it is at risk of losing second place to Labour, a position that the party has held in every contest since 2016. Every poll of Holyrood and Westminster constituency vote conducted since the ‘partygate’ row broke out just before Christmas has put the Conservatives behind Labour. 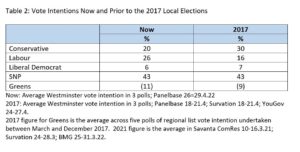 Labour, in contrast, was in dire straits before the 2017 local elections, averaging just 16%. So even though it represented an eleven point drop on what it achieved in 2012, its eventual tally of 20% was perhaps rather better than the party might have feared. At this election it might hope to garner the support of some of those who have become disaffected with the Conservatives over ‘partygate’ (certainly given their almost unanimous opposition to independence, very few Conservatives seem likely to switch to the SNP). A Labour second place would certainly reinforce the political fragmentation on the No side of the constitutional debate. Even so, Labour’s current average rating of 26% for Westminster vote intentions is still no more than the 27% it won in the 2017 UK general election. We are, it seems, still some way away from a significant Labour ‘revival’.

More difficult to assess are the prospects for the SNP. The party failed to register any advance in 2017, despite the fact that in the meantime it had won half the vote at the 2015 Westminster election and almost that in the 2016 Holyrood vote. Against that backdrop, the performance seemed rather disappointing – albeit that, like the Conservatives, the relative success of Independent candidates (especially in rural Scotland) means that the party can never expect to match its current poll rating in the local ballot boxes. Meanwhile, the party’s poll support is no higher now than it was five years ago, so it remains to be seen whether the party can achieve a morale-boosting performance as it contemplates its next move in its attempt to secure a second independence referendum.

In two-thirds of wards the SNP will face competition from the Greens for the support of Yes supporters. The Greens have been doing well in the polls in the wake of their decision to enter the Scottish Government, though their standing was also relatively high five years ago. Outside Glasgow and Edinburgh, however, the party has so far struggled to secure the substantial share of the vote needed to achieve a quota. Thus, even if there is some leakage from the SNP to the Greens on the first preference vote, some of those voters may still give a second preference to the SNP – as indeed over two in five did in 2017. Consequently, those votes might eventually help elect a SNP candidate. Indeed, the fact that the two parties are now collaborating in government might encourage more Green first preference voters to give a second preference to the SNP, and indeed vice-versa.

Of course, supporters of the pro-Union parties may reciprocate and give a second preference to candidates of other parties who share the same stance on the Union. After all, many seemed prepared to vote tactically in last year’s Holyrood election. Moreover, as a recent analysis for the Electoral Reform Society has shown, second and subsequent preferences had a notable impact on the outcome in seats five years ago. However, will No supporters be as willing as their Yes counterparts to spread their preferences across all those parties that back their side in the constitutional debate – or might one side or the other gain an advantage when votes are transferred?