Pointers from the Final Polls

The campaign is over and voters are now heading to the polling stations. The secrets of the ballot box will be unveiled tomorrow and on Saturday. In the meantime, what do the polls suggest we should anticipate when the results are revealed?

Five polls have been published in the last 48 hours. In each instance polling continued through to the Monday or Tuesday before polling day. They are therefore the polls that might be regarded as being closest to a ‘prediction’ of what might happen on Thursday.

The following table shows the average rating for the parties across these five polls. It also shows what the same five polling companies were saying just before (or at the very beginning) of the election campaign. 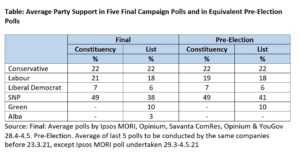 If we assume that the changes in the share of the vote since the last election in 2016 that are implied by these final polls were to be replicated in every constituency and region, the figures would put the SNP on 64 seats, one short of a majority. What this really means is that there is apparently a 50/50 chance that the SNP will secure an overall majority on their own – and thereby repeat the party’s success in 2011, a success that paved the way for the independence referendum of 2014.

The uncertainty of the outcome is underlined when it is appreciated that there is a clutch of nine marginal seats being defended by the Conservatives or Labour with a majority over the SNP in 2016 of five points or less. Winning six of them would be enough for the SNP to reach 65 seats irrespective of what happens on the list. However, the swing to the SNP in the national polls is not high enough for them to be sure of reaching that target. Although a 49% SNP vote on the constituency ballot would represent a 2.5 point increase on the party’s 2016 tally, at 22% the Conservatives’ poll rating is on a par with its vote in 2016, while Labour’s vote is only one a half points down. In practice, of course, even if the final polls are accurate, there will be variation in the swing from one seat to another – which might or might not be to the SNP’s advantage.

What would appear to be more certain is that the Conservatives will remain the largest opposition party at Holyrood. Although Labour are breathing down the Conservatives’ neck on the constituency vote, the party is four points adrift on the list. Not least of the reasons for this is that on average as many as one in seven of those who say they are voting for Labour on the constituency ballot tell the pollsters that they are voting Conservative on the list. The Conservatives have been appealing to unionist voters to vote for them on the list because (they argue) that that is best way of stopping the SNP securing an overall majority. The veracity of that claim is open to challenge, but it may nevertheless have had some impact on unionist voters.

Not that the campaign has had much impact overall. For the most part the average standing of the parties in the final polls are much the same as it was when the five same companies polled shortly before the election campaign began. It looks as though that whatever emerges from the ballot boxes was largely set in stone before the politicians endeavoured to campaign in the midst of a pandemic. Apart from a modest rise in Labour support on the constituency (but not the list) ballot, the only other change of note is a three-point fall in SNP support on the list ballot. This matches the average 3% tally being recorded by Mr Salmond’s Alba Party, which only entered the fray after (all but one) of our pre-election polls was conducted – and the polls indicate that most of Alba’s support is, as we might anticipate, coming from those who are backing the SNP in the constituencies.

Not that Mr Salmond’s intervention is the principal explanation as to why the SNP’s list vote is as much as eleven points lower than its constituency share. While around one in twenty SNP constituency voters are switching to Alba on the list, as many as one in seven are backing the Greens. As a result, the Greens appear set for a record breaking performance in the election – and are thus set to do far more than Alba to boost the number of pro-independence MSPs at Holyrood.

Yet Holyrood may have a substantial pro-independence majority of MSPs even though opinion on independence itself is evenly divided. On average the five final polls put support at 48% (after excluding Don’t Knows) somewhat down on the 51% recorded by the same polling companies in their pre-campaign polls. Support for independence is now back at the level that it was before the pandemic. Indeed, polling by both YouGov and Lord Ashcroft suggest that the mood that was abroad last summer that an independent Scotland might have handled the public health crisis more effectively has disappeared. According to YouGov only 13% of 2014 No voters now think that an independent Scotland would have handled the pandemic better, a figure that is almost matched by the 10% of Yes supporters who believe it would have fared worse. On the other hand, the impact of Brexit on attitudes towards independence remains as strong as ever. At 55%, support for independence among Remain voters in recent polls is as much as 25 points higher than it is among those who voted Leave.

Of course, it is far from certain that the likely pro-independence majority at Holyrood will be able to hold an independence referendum. But in the meantime, today’s election looks as though it will serve as a quasi-referendum. As has been evident throughout the campaign the SNP are on the constituency vote at least scooping up the support of nearly all those who would vote Yes to independence, while the party is largely being shunned by those who would vote No. On average, as many as 88% of Yes supporters are backing the SNP, while just 8% of No voters are doing so. Although most unionists would wish it were otherwise, the constitutional question has come to dominate Scottish politics.