Not So Hypothetical A Swing After All? First Post-Boris Poll from Lord Ashcroft

In recent weeks and months more than one poll has asked people in Scotland either how they would vote in anther independence referendum should Boris Johnson become Prime Minister or how they would vote in the event that the UK left the EU without a deal. The responses to these hypothetical questions suggested that either eventuality could produce a swing in favour of Yes which, although relatively small, could tip the balance of opinion in favour of Scottish independence.

Britain has not left the EU as yet, either with or without a deal. But Boris Johnson has become Prime Minister and his government has indicated a willingness to leave the EU without a deal on October 31st should it be unable to renegotiate the deal that Mrs May had agreed with the EU. So, if the hypothetical polling about the impact on attitudes towards independence of either Boris Johnson becoming Prime Minister or the UK leaving the EU without a deal was at all correct, we might anticipate that a small but potentially decisive swing in favour of independence should already be manifesting itself in how people now say they would vote in a second independence referendum.

A new poll today from Lord Ashcroft and Holyrood magazine, the first measure of Scottish public opinion since Mr Johnson secured the keys to Downing St, suggests that such a swing may well have occurred. It reports that 46% now say that they would vote Yes in response to the question that appeared on the ballot paper in the 2014 referendum, rather more than the 43% who said they would back No. Once the Don’t Knows etc. are left to one side this translates to 52% Yes, 48% No. At the same time, the poll confirms previous evidence that voters may be warming somewhat to the idea of holding a second referendum sooner rather than later, with 47% saying they are in favour of one in the next two years and 45% opposed.

Lord Ashcroft has not previously polled on Scottish independence in the wake of the EU referendum, so there is no previous poll from that particular stable with which we can compare these latest figures on attitudes towards independence. However, four polls conducted between April and June on average put Yes on 48% and No on 52%, and thus Lord Ashcroft’s poll is consistent with the claim that in recent weeks there has been a small but potentially significant swing in favour of Yes. Moreover, this is only the second poll of any kind during the last three years to put Yes ahead.

Of course, what is just. a relatively small swing could simply reflect no more than the chance variation to which all polling is subject. If Scotland is indeed more or less evenly divided in its attitudes towards independence we can anticipate that some polls will put Yes ahead while others indicate the opposite. We will certainly need the apparent swing registered by Lord Ashcroft’s poll confirmed by other polls before we can draw very firm conclusions. However, in the meantime one key feature of this poll should be noted, that is, that it adds to the already existing evidence that opposition to Brexit (a view still shared by two in three Scots according to today’s poll) is fuelling increased support for independence.

We pointed out last month that, at 48%, the average level of support for independence in polls conducted between April and June this year was three points up on the equivalent figure for those conducted in the second half of 2018. Moreover, we also noted that this increase in support was confined to those who had voted Remain (together with those who did not vote in the EU referendum).

The table below updates this analysis. In the final row, we show separately for those who voted Remain and those who backed Leave (together with those who did not vote) the level of support for Yes and No (to independence) in Lord Ashcroft’s poll. Immediately above this row are the equivalent figures (as previously published) for those polls conducted between April and June this year, while the top row shows the relevant data for polls conducted in the second half of last year. 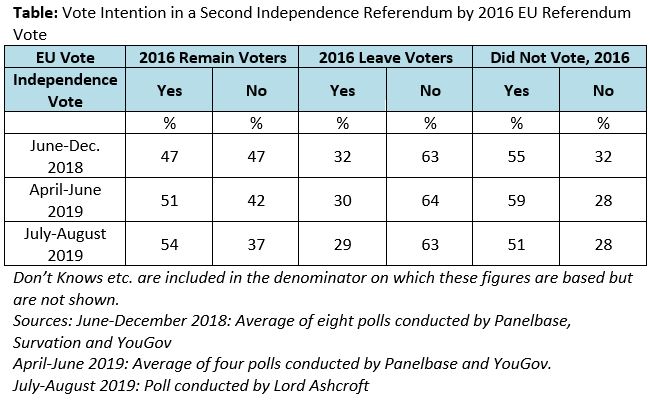 The trend among Remain voters is very different from that among Leave voters. In the second half of last year Remain voters were evenly divided between Yes and No supporters. But by April and June this year a nine-point lead had emerged. Now Lord Ashcroft finds as much as a 17-point lead for Yes among Remain voters. In contrast, the balance of opinion among Leave voters is little different in Lord Ashcroft’s poll from what was being reported by other polls during the course of last year. This is just the contrasting pattern we would expect to find if the increased support for independence in Lord Ashcroft’s poll is the product of concern about Brexit.

Meanwhile, concern about Brexit among Remain voters is unlikely to be assuaged by their feelings about Boris Johnson. Just as south of the border, the new Prime Minister is popular among those who voted Leave, but is deeply unpopular among those who voted Remain. Asked to say what they thought of Mr Johnson by giving him a score of between 0 and 100, Leave voters on average give him a score of 50, making him the single most popular party leader among such voters. In contrast, Remain voters give him a mark of just 13 – only Nigel Farage is regarded even less favourably. All in all, the next few months look set to be challenging times for those who believe that Scotland should remain part of the Union.

Elections, parties & leaders How Scotland should be governed