Could Brexit Yet Undermine the Future of the British State?

Twenty years ago today, the Scottish Parliament acquired the legislative powers that it had been granted under the 1998 Scotland Act. The new body, housed temporarily in the Assembly Hall of the Church of Scotland at the top of the Mound in Edinburgh, was formally opened by the Queen, and the occasion marked by a fly-pass by Concorde and the Red Arrows.  The British state signalled its recognition and acceptance of devolution.

But today, it is the future of the British state rather than of the Scottish Parliament that seems the more uncertain. The Scottish Government has indicated that it wishes to hold before the next Scottish Parliament election in May 2021 what would be Scotland’s second referendum on whether it should remain part of the UK. The immediate impetus for this move comes from the outcome of a referendum on Britain’s membership of the European Union in which Scotland voted to Remain by 62% to 38% but the UK as a whole backed Leave by 52% to 48%. From a nationalist perspective, this result meant that Scotland’s ‘democratic wishes’ were being thwarted by the very different views expressed by those living south of the border.

Hitherto, however, there has been little evidence that the Brexit debate has moved the dial significantly on attitudes towards independence. For example, in the second half of last year polls of how people say they would vote in another independence referendum reported on average that (after leaving aside Don’t Knows) 45% would vote Yes and 55% No, that is, exactly in line with the outcome of the referendum held in September 2014. True, there were signs after the EU referendum that some of those who backed Remain had switched from No to Yes, but these were counterbalanced by the decision of some of those who voted Leave to switch from Yes to No. Attitudes towards the EU and those towards independence had become more closely intertwined, but the overall balance of support for independence remained unchanged.

However, there are now signs that this is no longer the case. After a four-month period over the winter during which there were no polls of voting intention in a second independence referendum, between mid-April and mid-June four such polls have been conducted, three by Panelbase, and one by YouGov. That, perhaps, is not as many as we would ideally like in order to come to a firm conclusion. However, the pattern in all four has been consistent. They all put support for Yes above the 45% mark – and on average (after leaving aside Don’t Knows) the figure stands at 48%. It would seem that the balance of support for Yes and No has become even more finely balanced than it was already.

This apparent three-point swing to Yes has, of course, occurred against the backcloth of an impasse over Brexit in the House of Commons – an impasse that has brought down the Prime Minister and seemingly increased the prospect that the UK might leave the EU without a deal.  Meanwhile, recent polling of how people say they would vote in an independence referendum in the event of a no-deal Brexit has suggested that such an outcome might generate a majority in favour of independence, while the same is true of what people say they would do if the current favourite to win the battle to be Theresa May’s successor, the leader of the Leave campaign, Boris Johnson, were to become Prime Minister.

There are signs that this is precisely what has happened. In the table below, we show how on average people say they would vote in an independence referendum broken down by whether and how they voted in the EU referendum. The analysis is shown both for all polls conducted in the second half of last year and, again, in the four polls conducted in the last couple of months. We can see immediately how attitudes towards the EU and support for independence had already become intertwined. In the second half of last year those who had voted Remain were evenly divided between Yes and No to independence, whereas those who had voted Leave were opposed to the idea by almost two to one – though it was those who did not vote in the EU referendum (which group consists disproportionately of younger voters including those who were too young to vote in 2016) who were most supportive of Yes to independence. 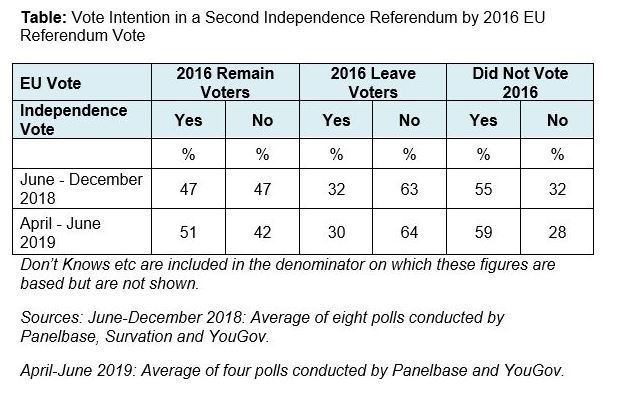 This gap has, however, opened up further. In recent polls support for Yes has on average been running at some four points above where it stood in the second half of last year among Remain voters (and, indeed, those who did not vote in 2016). In contrast, there is no sign of any increase in support for Yes among those who voted Leave – indeed, if anything, the opposite is the case.

In short, not only have recent polls suggested that there has been something of an increase in support for independence in recent months, but also that this rise has occurred entirely among those who voted Remain (and those who did not vote in 2016). It would seem that the Brexit impasse has motivated some Remain supporters in recent months to re-evaluate their attitudes towards the Union. If so, then we do not need to rely on the answers to hypothetical polling questions to conclude that the outcome of the Brexit process could potentially change the balance of support for independence versus staying in the Union – and so determine the future of the British state.

How Scotland should be governed