The SNP: Not so much a party, more of a movement?

Once upon a time the early autumn of the average London-based political journalist consisted of three weeks spent at three UK party conferences and then a return to their regular beat at Westminster. The SNP’s gathering during the ‘October break’ could be left to their colleagues in Edinburgh and Glasgow to cover. After all, little of what was said or done was likely to be of interest to their audience south of the border.

No longer. This week’s SNP conference will see many a journalist travel north. After all, the party is now the third largest at Westminster, making it a recognised player in the world of Westminster politics. It has just secured another five year term running Scotland’s increasingly powerful devolved government, albeit without quite having an overall majority. Meanwhile, if the results of local by-elections during the last couple of years are anything to go by, the party is now also on course to become the dominant force on most of Scotland’s local councils. These days, what the SNP says and does matters.

That, of course, is especially the case when it comes to the fallout from the UK’s decision to leave the European Union. At last week’s UK Conservative party conference, journalists and commentators were hanging on the Prime Minister’s every word for clues as to what she thought ‘Brexit’ should mean. This week, they will be equally attentive to what the First Minister has to say about whether and in what circumstances she might be minded to hold a second referendum on Scottish independence.

That the SNP has now come to dominate the political sympathies of voters in Scotland is underlined by the most recent responses to a set of questions that are regularly included on the Scottish Social Attitudes (SSA) survey and are designed to ascertain to which party, if any, voters feel some sense of attachment – and thus to whom perhaps they are likely to be loyal in future.  First of all, respondents are asked:

Generally speaking, do you think of yourself as a supporter of any one political party?

If they respond negatively, they are asked a follow-up:

Do you think of yourself as a little closer to one political party than to the others?

And only if they only say no to that question as well are they then also asked:

If there were a general election tomorrow, which political party do you think you would be most likely to support?

The graph below shows the proportion of people in each SSA conducted since 1999 who have named the SNP in response to one of these questions. When the Scottish Parliament first met, only one in five Scots identified with the party and that figure subsequently fell away to little more than one in eight.  Unsurprisingly, perhaps, its support did reach new peaks in the immediate wake of the party’s success in the 2007 and 2011 Scottish Parliament elections. However, even on the latter occasion (when the party won an overall majority) only one in three identified with the party, while subsequently that proportion fell back to around just one in four, at which level it still stood in the months immediately before the referendum in 2014. 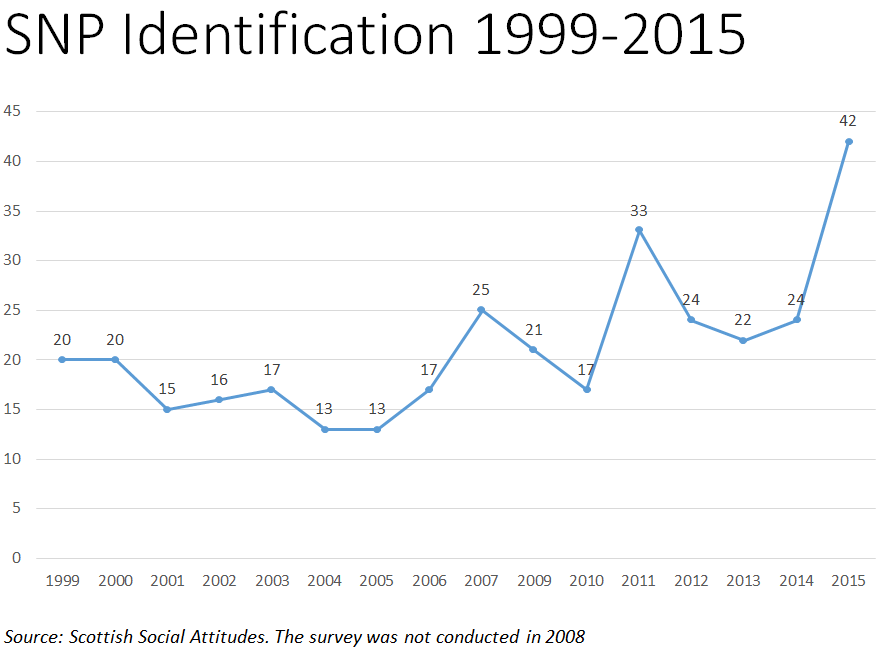 However, in the most recent reading, obtained shortly after the party’s success in the 2015 UK general election, the proportion of SNP identifiers jumped to an unprecedented level – 42%. Given the peaks in support registered in 2007 and 2011, it is not in itself surprising that the figure should have reached some kind of new high. Nevertheless, the scale of the peak is still remarkable. Back in 2007 as many as one in four (25%) of those who voted for the party in that year’s Scottish Parliament election did not admit to being a SNP supporter, while, at 22%, the figure was almost as high in 2011. This time, however, it is just 14%. It appears that the SNP did not simply gain votes in the wake of the September 2014 referendum, but secured a large phalanx of people who had come to feel attached to the party and may even consider themselves to be a ‘nationalist’.

It is not only the level of SNP identification that has changed; so also has its character. As well as asking people every year which party they support, SSA has also regularly asked is respondents to choose between five different constitutional options:

Scotland should become independent, separate from the UK and the European Union

Scotland should become independent, separate from the UK but part of the European Union

Scotland should remain part of the UK, with its own elected parliament which has some taxation powers

Scotland should remain part of the UK, with its own elected parliament which has no taxation powers

Scotland should remain part of the UK without an elected parliament

Those who choose either of the first two options can be regarded as supporters of independence, while those who pick either the third or the fourth option can be seen as preferring a devolved Scottish Parliament within the framework of the UK. Note that those backing the last option – no Scottish Parliament at all – are a relatively small group, rarely comprising much more than 10% (and most recently just 6%) of the SSA sample, and thus the figures for this group should be treated with particular caution.

In Table 1 we show for every SSA since 1999 the level of identification with the SNP separately for those backing independence, devolution and no parliament at all. As we might anticipate, it has always been the case that those who prefer independence are more likely to say they are a SNP supporter than are those who would prefer to remain in the UK. Even so, in the early years of devolution well under half of those who backed independence regarded themselves as a SNP supporter.  The party was evidently struggling to secure the backing of many of those who might be considered to be part of its core constituency, let alone anyone else.  Even in more recent years, as the party made rather greater electoral progress, only just over half of those who supported independence identified as a SNP supporter. 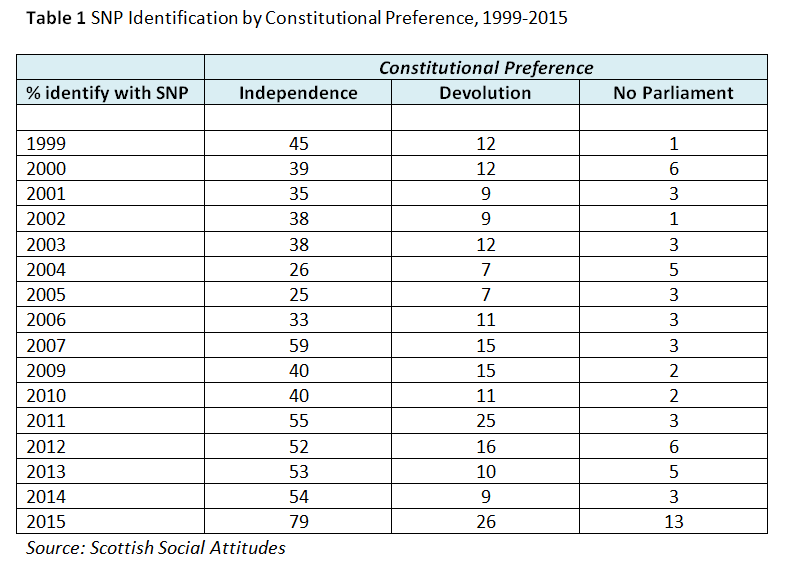 But in 2015, in the wake of the independence referendum, this figure rose to nearly four in five (79%). True, the party also gained some ground amongst those who opt for devolution (some of whom, incidentally, voted Yes in the referendum) but at 26% the figure amongst that group is still much the same now as it was in 2011.

The SNP were, of course, the principal protagonists in favour of independence during the September 2014 referendum. It appears that the party’s stance in that high profile event ensured that the SNP came to be regarded as the party of independence to a far greater extent than ever before. Backing independence and identifying as a ‘nationalist’ came almost to be synonymous with each other. As a result, the party no longer simply looks like an organisation in pursuit of political power but has come to resemble a movement motivated by an idea.

This is why the question of holding a second independence referendum will be such a delicate one for Nicola Sturgeon this week. Her natural caution seemingly disinclines her from taking what the polls suggest would still be a huge gamble. She would prefer to get on with the task of governing. However, she cannot afford to give the impression that her party has come to the conclusion that it cannot deliver on its raison d’être after all; for it is faith in independence that provides the foundations on which her party’s electoral dominance now heavily rests.