The Final Poll (apart from the one that really matters!)

Today’s Times carries the final opinion poll of the Scottish Parliament election campaign, conducted by YouGov between Monday and yesterday. This is the only poll of the campaign that would usually be regarded as a ‘final poll’, that is one that has been conducted sufficiently closely to polling day that its accuracy can reasonably be assessed by comparing its voting intentions with the tally of votes that actually emerges from the ballot boxes.

It has three key features. First, it suggests that support for the SNP has slipped a little during the final phase of the campaign. It puts the nationalists on 48% on the constituency vote, down two points on YouGov’s previous poll in mid-April, and on just 41% on the list vote, down four. Such a performance would still be enough for the party to win an overall majority, but it could mean the party ended up with no more than the 69 seats it won five years ago.

The slip in SNP support is not unique to this poll. It was also apparent in polls from Panelbase and Survation published earlier this week. Not that there has been any sudden waning in support for independence, which, at 46% (once Don’t Knows are left aside), remains unchanged from YouGov’s previous poll. Equally there has been little change in the popularity of Nicola Sturgeon.  Around three in five say that she is doing well, just as they did in YouGov’s two previous polls.

What, however, there is some evidence of is a decline in voters’ satisfaction with the SNP’s performance in government. Just 41% now say that they approve of the party’s record in office, down five points on YouGov’s previous poll and also down two points on the position in March. Voters are also more critical now of the party’s record on education in particular. It may be that the nationalists have made a bit of a mistake in allowing much of the final phase of the campaign to focus on speculation on the prospects for a second independence referendum rather than how they would enhance the government of Scotland under the existing constitutional settlement.

The second key feature of today’s poll is that the Conservatives and Labour are thought to be neck and neck in the battle for second place. While Labour are estimated to be three points ahead of the Conservatives on the constituency vote, they are reckoned to be a point behind on the list – and it is the latter that will primarily determine how many seats each of the two parties secures. When a poll puts two parties this close together, the only safe conclusion to draw is that we are not sure which one is ahead. But if the picture painted by YouGov is at all correct, Labour have certainly failed to open up much of a gap between themselves and the Conservatives. That they have apparently found it so difficult to do so cannot have been helped by the apparent failure of Kezia Dugdale to impress herself favourably on the electorate, in sharp contrast to the success of Ruth Davidson.

All three features are also apparent in a poll of polls based on the three polls conducted during the last ten days of the campaign (see Chart below). Labour appear to be ahead of the Conservatives on the list vote, but the two parties are tied on the list ballot. The Greens are only a point ahead of the Liberal Democrats. Meanwhile, at 49% on the constituency vote and 44% on the list, SNP support is down by three points on the constituency vote and two points on the list as compared with the party’s tally in our previous poll of polls. Who says that the result tonight is a foregone conclusion? 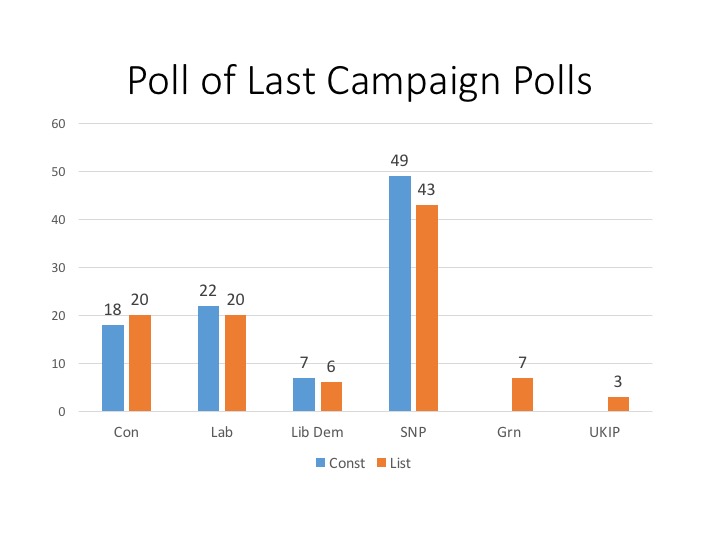