Will The Tax Debate Move Voters?

One of the rituals of elections in Scotland nowadays is that at the beginning of the campaign BBC Scotland conducts a poll in which it attempts to establish the popularity or otherwise of the various proposals being put forward by the parties. The results of the exercise conducted (by Ipsos MORI) for this year’s Holyrood election on May 5th were published this week. They reveal how difficult it can be for political parties to find a tune that is consistently popular with the public.

The focus of much of the debate between the parties is proving to be tax, and above all income tax. The Scottish Parliament has always had the ability to vary the basic rate of tax by up to three pence in the pound – and in the first devolved election of 1999 a SNP proposal to use that power to reverse a UK government proposed penny cut in the rate was a centrepiece of the campaign. However, this is the first election to be held since the Parliament has been granted (in two tranches) almost complete responsibility for the taxation of earned income in Scotland. The change gives the Scottish Parliament a much greater ability to tax and spend more than the UK government does in England – or to tax and spend less. The prominence of taxation in the election debate is a testament to the significance of this overhaul of Scotland’s devolution settlement.

Moreover, the parties are presenting voters with what would appear to be a clear and consistent set of choices on how the new power should be used. The Conservatives say the level of taxation should be the same as in England. The SNP almost agree with them, except that they would not implement fully the increase in the threshold at which people start paying tax at 40p in the pound that was recently announced by the UK Chancellor. The Liberal Democrats, on the other hand, are arguing that all rates of income tax in Scotland should be increased by a penny in the pound, while Labour not only wish to do the same but also both to limit the increase in the 40p rate threshold and to raise the top rate of tax on incomes over £150,000 from 45p to 50p.

The BBC’s poll asked its respondents about all these ideas. In so doing it invited them to respond on a scale from one to ten, where one meant the policy should never be put in place while ten meant it was very important that it was put in place quickly. We can regard a score of seven or more as indicating support for the policy, while a score of four or less implies opposition.

Not a bit of it. To begin with just over half (53%) support keeping the level of income tax the same as in England, while only 23% actually indicate they are opposed to the idea. This should not come as a surprise. Although previous Scottish Social Attitudes surveys have consistently found a majority in favour of devolving taxation to the Scottish Parliament, they have also identified a reluctance to embrace the idea that the rate of income tax might be different in Scotland than in England.

Yet despite this pattern of response, when in the BBC poll people were asked whether the top rate of income tax should be increased from 45p to 50p, no less than 69% indicated that they were in favour while only 17% were opposed. True, the question did not refer explicitly to this proposal being implemented specifically in Scotland, but nonetheless it still suggests that for many people the attraction of making the supposedly rich pay more actually outweighs their commitment to taxation being the same as in England.

However, the picture is even more nuanced than that. For at the same time, 50% support increasing the rate of income tax in Scotland by a penny in the pound ‘and spend the money raised on schools and colleges’. Just 28% are opposed. Now this 50% group could mostly comprise the just under one-half of respondents who did not explicitly support the idea of keeping tax rates the same as in England. Yet it seems unlikely that opinion is as consistent as that. After all, those living in the most deprived parts of Scotland are especially keen on increasing income tax yet they are not particularly reluctant to say that income tax should be the same on both sides of the border. Rather, it seems that when people are presented with the potential benefits of increasing income tax, the reluctance of some to pay more than in England may again be set aside.

The one policy proposal, however, that does not seem to be popular at all is not raising the threshold above which people start to pay tax at 40p in the pound.  Almost as many (33%) oppose this idea as support it (36%). This, of course, is not quite as explicitly redistributive as ‘soaking the rich’ with a 50p rate, but one might still expect there to be considerable support for an idea that is clearly aimed at the better off. The explanation? Well, the question did not refer to the benefit in terms of spending that might arise from such a proposal, while it did say explicitly that it meant the tax position would be different in Scotland than in the rest of the UK. In these circumstances it seems the inclination to seek comparability with England kicked in once again.

So there is an apparent reluctance amongst many people in Scotland to pay more tax than those whom they regard as their fellow citizens in England. But it is a reluctance they may perhaps be prepared to set aside if they can be persuaded that it might produce a benefit, such as better public services, or simply mean that those richer than themselves pay more. This does not make it look like an issue on which it is going to be easy for any of the parties to move votes in one direction or the other. In contrast, the difference of view on the constitutional question amongst voters is both sharp and clear; according to the BBC poll, 47% favour holding another independence referendum if the UK votes to leave the EU, 42% are opposed. Just 10% sit on the fence!

Certainly, the polls show little sign of the SNP’s electoral dominance coming under immediate challenge. Eight polls conducted during February and March have now been published, including one from TNS BMRB released today but conducted in the first three weeks of March. As our chart below shows, on average these eight polls have put the SNP on 54% on the constituency vote and 46% on the list. Labour trail a long way behind with around a fifth of the vote on the two ballots – though contrary to much speculation, the party still appears to enjoy a clear lead over the Conservatives. In any event, if realised in the ballot box these figures would easily be enough to give the SNP an overall majority with some 72 seats. 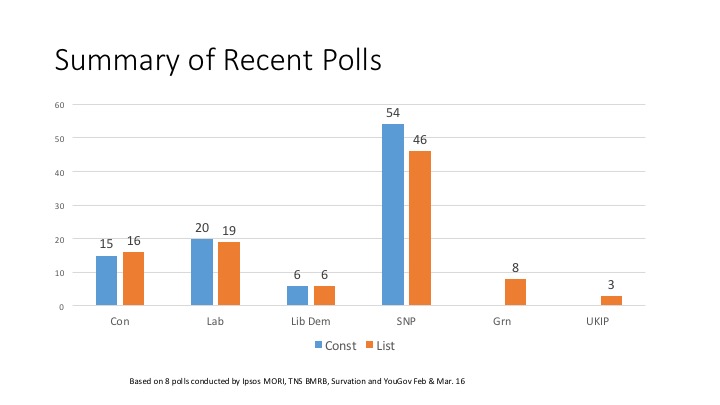 However, all of these vote intention polls were conducted before the campaign debate kicked off with televised leaders’ debates from the BBC on 24 March and from STV on 29 March. Maybe all the debate about tax has made a difference after all. We will have to await the first poll of April to find out.

P.S. If you feel disappointed that no pollster has asked you your views about tax or any of the other issues in the campaign, there is a chance to give your views – and find out how they compare with the stances of the parties – in a Voter Guidance Tool for the Holyrood election that has been put together by Strathclyde University. Just go to www.scotvote16.com and click away!

Elections, parties & leaders How Scotland should be governed Policy issues