With little more than a week and a half to go to the Scottish Parliament election (albeit with Labour remarkably still to unveil its manifesto) it seems there is nothing that can stand in the way of a second SNP overall majority. However, the battle for second place is evidently not resolved, as indeed is the question of who might come fourth.

Two polls published last week both put the SNP comfortably in pole position.  The first came from BMG Research in what represented that company’s first ever published poll north of the border. Reported in The Herald, it put the SNP on 53% on the constituency vote and 46% on the list. The second was from Survation for the Daily Record. It also put the SNP on 53% on the constituency vote though, as is typical of the company’s polls, it put the nationalists rather lower on the list at 43%. Neither figure was more than a point different from either Survation’s poll earlier this month for Unison or that for the Daily Record itself in mid-March.

However, the two polls painted a somewhat different picture of the battle for second place. BMG suggested that Labour were clearly ahead of the Conservatives – by five points on the constituency vote and four points on the list. Survation, in contrast, suggested the outcome of the battle was too close to call. The company put Labour at 18% on the constituency vote and 17% on the list – these represent the party’s lowest ever tallies in a Survation poll and places them just a point ahead of the Conservatives on the constituency vote and a point behind on the list. Given that the Panelbase poll that appeared in last week’s Sunday Times also put Labour at an all-time low and only a point separated them from the Conservatives, it appears that there is some risk that Labour support has fallen yet further and that consequently it cannot be 100% confident that it will hang on to second place.

Consequently, even though BMG along with YouGov in their most recent poll both still put Labour ahead, between them the four polls that have been conducted since Easter present a picture of a very tight race for second indeed (as illustrated below by our ‘Poll of Polls’). This is especially the case in respect of the list vote on which the outcome of the battle will primarily rest. If there is any tendency in these polls to overestimate Labour and underestimate the Conservatives’ electoral strength (as was the case in last year’s Britain wide polls), then Labour could indeed be in deep trouble. 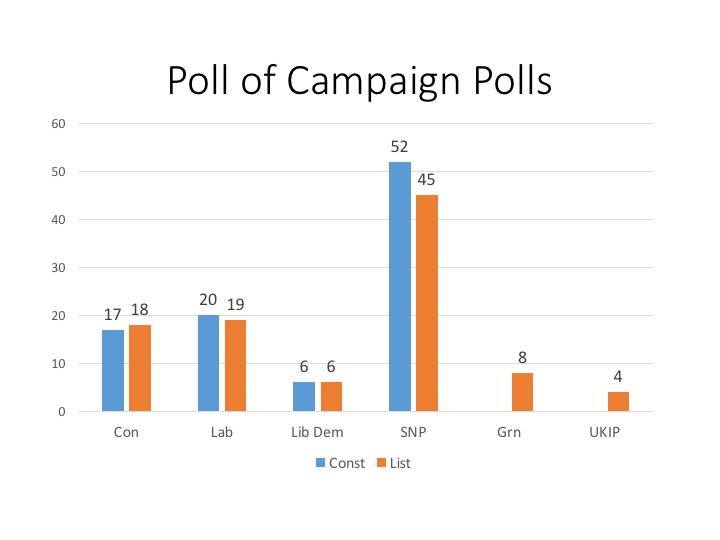 Indeed, BMG suggested that its polling showed that Labour was now a ‘toxic’ brand north of the border, much as has long seemed to the case of the Conservatives. Its evidence comprised the pattern of responses that it obtained when voters were asked in two different ways what they thought of increasing income tax in order to protect public services. Half of the respondents to the survey were simply asked whether they supported or opposed the idea, while the other half were asked whether they supported or opposed the idea after they had also been told that the proposal was Labour party policy. In the first instance 52% said they supported the proposal while 18% were opposed. In the second, 49% said they were in favour and 23% opposed. The differences between the two sets of figures seem, in truth, too small to substantiate the claim that Labour’s brand is particularly ‘toxic’, especially if due consideration is given to the fact that as each version was only asked of around 500 people, differences of that size might well have arisen as a result of chance variation.

But it is not only Labour who have reason to worry. So also have the Liberal Democrats. Not that the party seems destined to fall below the 5% it won on the list vote five years ago.  What, however, they appear to be at risk of losing is their position as the fourth party at Holyrood. True, at 11%, Survation’s estimate of the Greens’ share of the list vote continues to be particularly high. Even so, at 7% BMG’s estimate put the Greens above the vital 5-6% threshold at which votes begin to be rewarded fully with seats. Overall, the campaign polls have on average put the Greens two points ahead of the Liberal Democrats, an outcome that would surely see the party’s leader, Patrick Harvie, moved forward from his current position at the back of the Holyrood chamber, and might see his Liberal Democrat counterpart, Willie Rennie, moved yet further towards the back.

Still, as Nicola Sturgeon contemplates her continued occupancy of Holyrood’s centre front row seat, additional polling from Panelbase released in the Sunday Times today casts further doubt on how far a UK-wide vote to leave the EU would instigate would instigate a swing in favour of independence sufficient for her to contemplate using her majority to call a second independence referendum. The latest findings show a continued narrow majority of 53% to 47% for staying in the UK (once Don’t Knows are left aside), very similar to Survation’s estimate of 52% to 48%, and exactly in line with Panelbase’s figures in January. At the same time, today’s poll confirms that Scotland is set firmly to back remaining in the EU. It puts Remain ahead by 63% to 37% (once Don’t Knows are set aside), in between Survation’s estimate of 65% to 35% and BMG’s of 61% to 39%. At the same time Panelbase also show that while Scotland seems to share some of the concerns in the rest of the UK about what remaining in the EU might mean for immigration, it is apparently not particularly persuaded of Leave’s argument that getting out of the EU would strengthen the country’s democracy.

But what the Panelbase poll does not show is much of a movement to Yes when respondents are asked how they might vote in a second independence referendum should the UK vote to leave the EU. The result is just a three point swing to Yes, less than the five point swing that Panelbase uncovered when it undertook a similar exercise in January and only enough to leave Yes and No tied on 50% each. It seems that the SNP will need more than a vote for ‘Brexit’ on June 23rd if a second five years as a majority government is going to deliver the independence that the first five years failed to do.