With the SNP apparently a long way ahead in the polls, much of the commentary about the Scottish election, including that provided by this blog has focused on whether Labour will or will not prove capable of retaining second place. Two polls released this week have done nothing to dispel that preoccupation.

Not that the latest polling news has been wholly unalloyed for the SNP. True, both of this week’s polls put the party sufficiently far ahead to suggest that it is still on course for an overall majority. Ipsos MORI, in a poll for STV, put the SNP on 51% on the constituency vote and 45% on the list, while in their latest monthly poll TNS BMRB credited the party with 52% and 45% respectively on the two votes. However, both sets of figures represented something of a drop in SNP support when compared with the relevant company’s previous poll. In Ipsos MORI’s case there was a two point fall in nationalist support on the constituency vote and four points on the list as compared with the company’s previous poll in February. TNS reckoned SNP support had fallen four points on the former vote and two points on the latter. However, both companies had reported relatively high levels of nationalist support in their previous poll, while their figures in their latest polls were in fact well in line with the average level of support recorded for the party in other companies’ polls conducted during the campaign. There was, in truth, not a great deal in these polls for Nicola Sturgeon to lose much sleep about.

The same cannot be said for Labour’s leader, Kezia Dugdale. Ipsos MORI’s poll in particular occasioned not only bad headlines for her party, but also for her personally. Labour’s estimated support was only slightly down, by one point on the constituency ballot and two points on the list, but it was enough in both cases to ensure that at 19% and 17% respectively the party’s support had fallen to the lowest level ever recorded by the company (on both ballots), as had also been the case in both Panelbase’s and Survation’s most recent polls. Even more importantly, however, it was enough to put the party two points behind the Conservatives on the list vote, the vote on which both parties will be heavily reliant when it comes to picking up seats. Hitherto no poll had put the Conservatives more than one point ahead on either vote.

All in all, it was a poll that gave the impression of a party that is slowly sinking into a quicksand of electoral popularity from which it is seemingly incapable of escaping. True, the news from TNS BMRB was nothing like as bad. At 22% on both ballots, the party’s vote was up slightly (by one and three points respectively) since March, enough to put the party clearly ahead (by five and four points respectively) of the Conservatives. However, the interviewing for this poll was done over an extended three week period starting at the beginning of April. If support for Labour has been slipping away during the course of the campaign, this may not be evident in a poll undertaken over such a lengthy period.

Meanwhile there were two other devastating findings for Kezia Dugdale in the Ipsos MORI poll. The first was that her personal net satisfaction ratings have nosedived such that she is not only less popular than her controversial UK counterpart, Jeremy Corbyn, but also has displaced the Liberal Democrat leader, Willie Rennie, as the least popular of the main Scottish party leaders. Those are findings that, if replicated in other polls, could well lead to speculation about Ms Dugdale future as Labour leader should her party indeed fail to retain second place.

Second, Ipsos MORI’s poll confirms that one of the criticisms of Labour that has often been heard since the referendum, viz. that voters do not know what Labour stands for any more, still has considerable force. Only 45% of respondents to the poll agreed that they did know ‘what Labour stands for these days’, whereas 63% said the same of the Conservatives, and no less 81% the SNP. To date at least, Ms Dugdale’s attempts to give the party a more distinctive image would appear to have reaped little dividend

Central to those attempts at this election has, of course, been Labour’s support for an increase in both the basic and the top rate of tax. Ipsos MORI’s poll confirms earlier findings that suggest, at first glance at least, these positions are quite popular. While 41% said that they opposed a penny in the pound increase in the basic rate of tax, 52% said they were in favour. Meanwhile, 75% said that they supported increasing the top rate of tax from 45p to 50p, with just 22% opposed. These figures are perhaps particularly striking given that Ipsos MORI’s question did not refer to any of the possible benefits (such as more spending on public services) that might arise from any of these tax hikes.

But what the poll also confirms is that Labour’s backing for these policies is not helping it win back voters from the SNP. Just over half of SNP voters (52%) back a penny increase in income tax, while no less than 81% say they support a 50p rate. In short, many SNP voters are backing the SNP even though they prefer Labour on the tax issue. Meanwhile, this poll confirms the evidence from previous polling that most voters (64%), including a majority of SNP voters (59%), also believe that income tax rates in Scotland should be the same as in England. It would seem that while voters in Scotland might prefer higher spending and taxes than they enjoy at present, they do not see why they should have to pay higher taxes than anybody else in the UK. Labour (together with the Liberal Democrats and the Greens) may have overestimated the willingness of voters north of the border to back using the new powers of devolution to implement a distinctive tax policy. 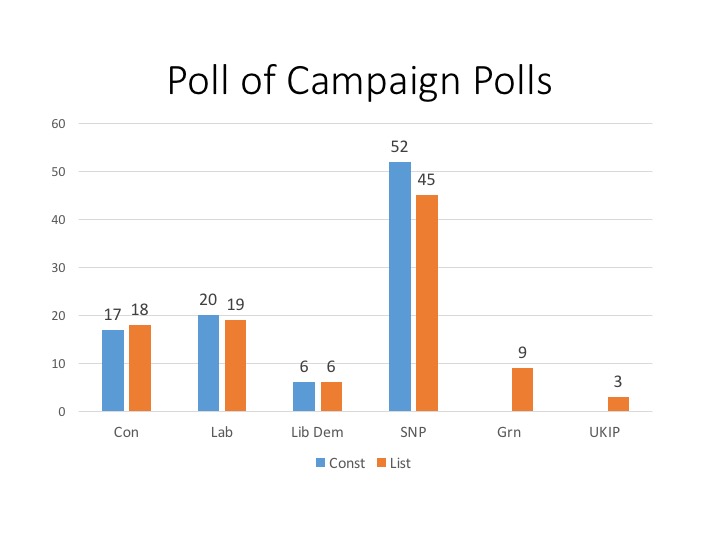 All in all, six polls of voting intention have now been conducted and published since the Easter weekend. Our graph above shows the average level of support for the parties across those six polls. There is just one change from the equivalent graph based on the first four such polls that was published in our previous blog – the Greens have edged up on the list vote from 8% to 9% (while UKIP have slipped back a point). That is bad news for Willie Rennie in his attempts to keep his party in fourth place. Labour are still a point ahead of the Conservatives on the list vote, but given the limitations of all polling that simply means we cannot be sure either way which party will emerge ahead. The SNP may be heading for a comfortable victory, but everybody else really does have a lot to play for in the last week.