What Difference did the Referendum make to Scotland’s Constitutional Debate?

Today MSPs pack their bags and prepare to campaign (or retire). Tomorrow will mark the day that if a majority had voted Yes in the independence referendum, Scotland would, according to the SNP’s proposed timetable, have become an independent country. It is thus an opportune moment to take a look at the state of Scotland’s constitutional debate so far as public opinion is concerned.

We are aided in that endeavour by the publication today of new results from ScotCen’s Scottish Social Attitudes (SSA) survey. Ever since the advent of devolution in 1999 this survey has been taking the public pulse annually on how the country should be governed. As a result, it has become the principal source of evidence on long-term trends in public attitudes towards Scotland’s constitutional arrangements. The 2015 SSA, from which these new results come, was conducted between July of last year and January of this, and is the first SSA to have been undertaken since the independence referendum. It thus provides us with important evidence on what the fallout from that referendum has been.

In virtually every year since 1999 SSA has asked its respondents the following question:

Which of these statements comes closest to your view?

– Scotland should become independent, separate from the UK and the European Union

– Scotland should become independent, separate from the UK but part of the European Union

– Scotland should remain part of the UK, with its own elected parliament which has some taxation powers

– Scotland should remain part of the UK, with its own elected parliament which has no taxation powers

– Scotland should remain part of the UK without an elected parliament

Now, the question can be regarded as a little dated – it was after all first crafted in the 1990s and does not address the question of exactly how powerful people would like any devolved Scottish Parliament to be. But it still addresses what remains the key constitutional question facing Scotland, that is, whether that Parliament should be a devolved institution or whether, instead, it should be the legislature of an independent state. It therefore can be used to help establish just how much difference the referendum has made to the balance of opinion on the constitutional question. This is especially so if we simplify matters and, as in the figure below, we combine the first two response options into a single ‘independence’’ category, and do the same for the third and fourth options and label them ‘devolution’.

Two key points emerge from this exercise. First, as we might anticipate, support for independence is now at an all-time high. At 39% it is four points higher than the previous record high on SSA, recorded as long ago as 2005. Morever, this represents no less than a 16 point increase in support for that option as compared with the position in 2012, just as the referendum campaign was taking off and when support was at an equal all-time low. Here is confirmation, if confirmation were needed, that the referendum campaign did indeed take support for independence to an unprecedentedly high level.

One possible explanation, that the sample of those interviewed by SSA contains too few people who voted for independence in 2014, can be dismissed right away. In fact, at 48%, the proportion who said they voted Yes in the referendum is actually a little higher than the 45% support that transpired in the ballot boxes. There is no evidence here that the SSA sample is biased in a unionist direction.

Rather, what we discover is that only 74% of those who said they voted Yes to independence in the referendum also choose one of the independence options in response to SSA’s long- standing question on constitutional preference. In contrast, as many as 86% of No voters choose either devolution or not having a parliament at all. It would appear that there is some kind of slippage between having voted Yes in the referendum and backing independence now. Yet there is no sign in the opinion polls that the proportion who say they would vote Yes in an independence referendum is any lower now than the 45% who did so in September 2014.

What, then, is going on? To begin to unravel this mystery we need to look at the pattern of responses to a second question that SSA has been asking more recently. Instead of referring to constitutional statuses such as ‘independent’ or ‘part of the UK’, it focuses on what should be the respective decision-making powers and responsibilities of the UK Government and the Scottish Parliament. As the table below shows, the options include the Scottish Parliament being responsible for all decisions for Scotland (viz. independence), everything apart from defence and foreign affairs (‘devo max’) and everything apart from defence, foreign affairs, taxation and welfare (more or less the status quo until now).

Attitudes towards who should make decisions for Scotland, 2010-15 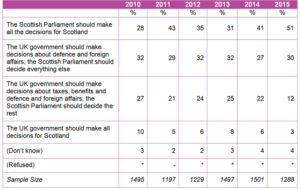 Here we obtain a very different picture of the balance of opinion on how Scotland should be governed. Once again, we discover that the referendum has left its mark.  Whereas in 2012 just 35% said that the Scottish Parliament should make all decisions for Scotland (and indeed in 2013 just 31% did so), now the figure stands at 51%, far higher than the 39% who explicitly chose independence. At the same time another 30% say that the Scottish Parliament should be responsible for all of Scotland’s domestic affairs.

There has, in truth, long been an apparent public appetite for a Scottish Parliament that was considerably more powerful than the one that was created in 1999, and thus it was perhaps inevitable that if Scotland did not vote for independence in the referendum (as proved to be the case), steps would be taken to increase substantially the Parliament’s powers and responsibilities. Anything less would have failed to reflect the predominant public mood.

But evidently, there is a difference in the public mind between on the one hand having a powerful Scottish Parliament, including one whose powers would be the equivalent of those of an independent state, and on the other hand explicitly choosing the country being ‘independent, separate from the rest of the UK’. Apparently even some of those who voted for independence pull back from that notion, while, equally, there are quite a few No voters (amounting to 22% of this group) who say they would like the Scottish Parliament to decide everything including defence and foreign affairs.

Perhaps the lesson is that while there is widespread demand for highly autonomous Scottish institutions, many of that predisposition are still not sure they want to leave the UK.  In the event some still voted Yes in September 2014, while others voted No. The future of Scotland’s constitutional debate may well turn on whether these voters are persuaded during the course of the next five years that the more powerful Parliament that they now have does indeed represent ‘the best of both worlds’ they seem to want – or whether instead they decide that Scotland does indeed need to leave the UK after all.

How Scotland should be governed The Scottish independence referendum