Public Attitudes to Devolution in Wales – a Permissive Consensus?

The UK Government recently published a draft version of a new Wales Bill. This offers the prospect of more changes to the Welsh devolution settlement, to add to the many that have occurred since the National Assembly for Wales (NAW) was first established in 1999. But while the politicians debate matters, is there clear evidence on what the people of Wales want?

It was once very clear what they did not want. In March 1979, the Wales voted by an almost four-to-one margin to reject devolution. However, by the time that another referendum was held in September 1997, opinions had changed sufficiently for a very similar set of proposals to be narrowly passed. But this outcome left the country apparently divided right down the middle, and there seemed to be the potential for the very existence of the Assembly to become a running sore in Welsh politics.

In practice, it did not work out like that. Attitudes on the broad principle of devolution changed surprisingly quickly after 1997. Having only narrowly endorsed the creation of the NAW, the majority of people in Wales rapidly came to accept it. Within a few years of the referendum, a series of surveys, using questions that asked people to choose between several broad options for how Wales might be governed, found that opposition to devolution had fallen by more than half. In recent years studies have typically found that, when people are given several such options, fewer than 20% (indeed, often below 15%) now endorse the abolition of the National Assembly.

At the same time, however, those same studies also find that fewer than 10% support independence for Wales. The substantial majority favour devolution for Wales within the United Kingdom. The main dividing line is between those who broadly endorse the current level of autonomy, and those who would wish to go somewhat further. In most polls (such as that presented in the table below – also available here), those wishing to enhance the powers of the Assembly are somewhat greater in number, though without forming a majority overall.

‘Which of these statements comes closest to your view?’

Not only have findings like that in the table consistently been the the picture presented by multiple surveys during the last decade and more, but they have also been supported by focus group work conducted for bodies such as the Electoral Commission and the Richard Commission on the powers and electoral arrangements of the NAW. They were also supported by actual votes in the ballot box when in a referendum held in March 2011 63.5% voted in favour (albeit on a low turnout) of a significant increase in the law-making powers of the Welsh Assembly.

Other types of survey question have reinforced this broad picture. When asked about ‘which level of government should have the greater influence over how Wales is run’, respondents consistently choose the devolved level over Westminster by margins of around three-to-one. However, there is also some evidence that support for the Assembly remains somewhat conditional: the 2011 Welsh Referendum Study asked respondents whether various institutions should be abolished if they ‘started making lots of decisions that most people disagreed with’. Substantially more people were prepared to support abolition of the Assembly in that hypothetical scenario than the Westminster parliament.

It is a commonplace for political science research to identify substantial flaws in public knowledge of politics. However, knowledge of devolved politics in Wales appears to be particularly poor, with Carwyn Jones (First Minister for nearly six years) enjoying lower public visibility than even some minor party leaders at the UK level. More generally, the paucity of knowledge (and perhaps also the lack of clarity of the Welsh devolution settlement) help to generate confusion about who should be held accountable for policy successes and failures: many voters have no clear sense of which level of government is responsible for what. There is even some evidence of wishful thinking. When asked in 2011 to place ‘where things are now’ on a spectrum between No Devolution at one end and Independence at the other, supporters of independence and much stronger devolution tended to place the status quo quite close to their own preferred position – while those who believed that devolution should be abolished or rolled back reckoned that was where things now stood!

As stated, there is significant support in Wales for devolution to go further. But where and in what ways? Polling on specific policy issues reveals that strong majorities support the continued devolution of education and the NHS – even though public ratings of policy delivery in these areas have been consistently mediocre. But there has also been majority support in several surveys for policing to be devolved – which, unlike in both Scotland and Northern Ireland, it is not in Wales.

But taxation offers a more mixed picture. Under the terms of legislation already passed, the first 10p in the pound of income tax in Wales is due to be devolved in much the same way that it will be in Scotland next April. However, in contrast to the position in Scotland, at the moment at least the change will only be introduced once it has been approved in a referendum, and reluctance by the Welsh Assembly Government to go down this path means that so far the ballot has not been held. And, indeed, when asked directly how they would vote in a referendum over the partial devolution of income tax powers, survey respondents tend to lean marginally towards a No.

‘If there was a referendum tomorrow on giving the National Assembly for Wales powers to raise or to lower the levels of income tax in Wales, how would you vote?’ 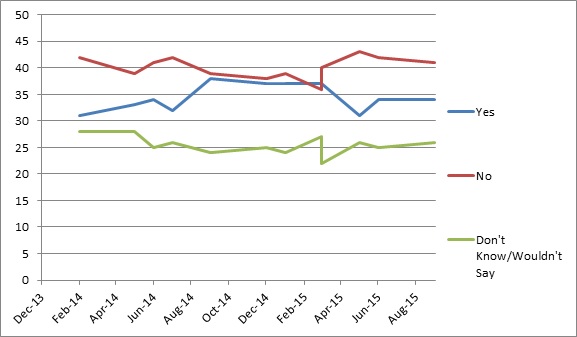 Overall, then, the picture of public attitudes in Wales is nuanced, and one that differs greatly from Scotland. There remains little desire for independence. Yet nor, these days, is there substantial support for abolition of the Assembly. For ten years or more, devolution within the UK has been the ‘settled will’ of the Welsh people. Yet the form and extent of devolution actually experienced has not been settled at all, even though there is little evidence of an insistent public demand for further change. The picture might, perhaps, be best characterised in much the same way as public attitudes towards European integration were in the late-1960s: as a ‘permissive consensus’, with the public willing to allow political elites to introduce further devolution, but not seeing the issue as so important that they demand action.

Roger Scully is Professor of Political Science in the Wales Governance Centre at Cardiff University. He is co-author of Wales Says Yes: Devolution and the 2011 Welsh Referendum, is Director of the Welsh Election Study, and blogs on electoral politics in Wales at http://blogs.cardiff.ac.uk/electionsinwales/

How Wales should be governed