Scotland A Year On – A Divided Nation?

Today is the day to take stock of where Scotland stands exactly a year on from an independence referendum that the UK government at least hoped would be ‘decisive’.

It hardly looks that way now. For Scotland appears to be divided straight down the middle on the constitutional question on which it voted exactly a year ago today.

During the last month five polls conducted by five different companies have asked people how they would vote now on the question that appeared on the referendum ballot paper, ‘Should Scotland be an independent country’.

A poll of polls based on these five polls (with Don’t Knows put to one side), puts Yes and No tied on 50% each. We cannot be sure who would win if a second referendum were held today. 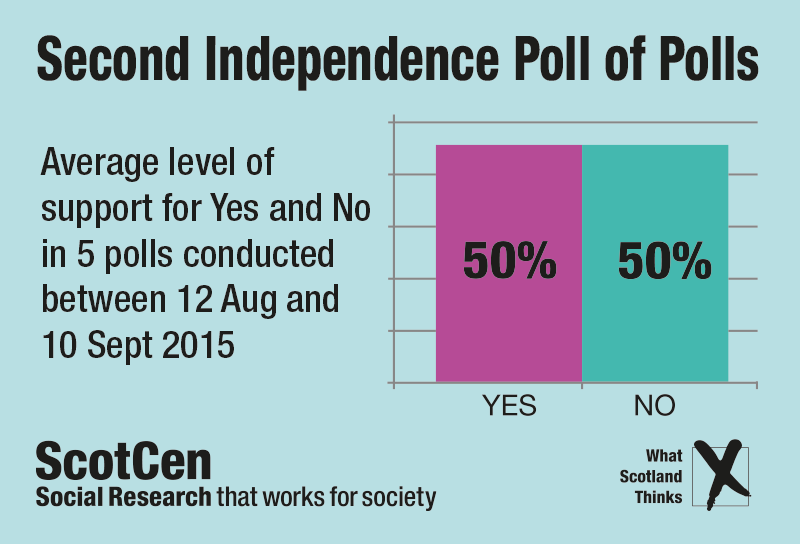 The two sides are closer than at any time during the referendum campaign itself.  The closest they came to each other during that period in this site’s poll of polls was Yes 49%, No 51% – the position for much of the week before polling day.

In the event, of course, the gap was rather wider than suggested by most polls with Yes on 45% and No on 55%.

Three of the five polls conducted during the last month not only asked their respondents what they would do now, but also what they did a year ago. Although all three of these polls put No ahead, they did so only narrowly – on average by 52% to 48%. This is the hardest evidence we have that there has been a small but perceptible swing to Yes during the course of the last year.

The position has been much the same for most of the last 12 months. During the course of the year, 25 polls have asked people how they would vote in a second referendum. Of these 17 put No ahead, 7 Yes ahead, while one had them tied. On average, once Don’t Knows are left aside, 49% said they would vote Yes, 51% No.

However, while attitudes towards independence may have shifted only a little during the course of the last twelve months, levels of support for the political parties have been transformed.

In nine polls conducted between the beginning of August and referendum polling day last year, support for the SNP for a Scottish Parliament election stood at 39% for the constituency vote, just five points ahead of Labour on 34%. At that point the SNP could not be sure of winning a second overall majority.

But of course last May the party won 50% in a UK general election, an arena in which hitherto the party had found it relatively difficult to win support. Now according to the five most recent polls of Scottish Parliament voting intentions, the SNP are on average on 54% and Labour on 22%. Such an outcome would give the nationalists an even bigger overall majority in the Edinburgh Parliament than they secured in 2011.

In the wake of the referendum voting for or against the SNP has become more or less  synonymous with support for or opposition to independence.  Recent polls show that on average no less than 89% of those who voted Yes in the referendum would currently vote for the SNP in a Scottish Parliament election.

Having voted Yes in the referendum most Yes voters have subsequently wanted to affirm their choice through backing the SNP – they did so last May and look set to do next May as well. Conversely, just 16% of No voters are minded to back the party.

However, the Conservatives and the Liberal Democrats are still in much the same place as a year ago, as indeed are the Greens. The Conservatives are averaging 14% on the constituency vote (down one on last summer), the Liberal Democrats 6% (up one).  Meanwhile Green support on the list vote (on which the party’s hopes principally rest) is at 7% also no more than a point adrift of where it was a year ago.

The prospect of a second majority SNP government, together with the slight narrowing of the gap between Yes and No on independence, has inevitably fuelled speculation that the nationalists would like to hold a second referendum. But the narrowness of the position in the polls also means the party is reluctant to make an unequivocal commitment to holding a second referendum for fear that it too could be lost.

But while much of the speculation in the last twelve months has been about the possibility of a second independence referendum, much of the action has been towards introducing more devolution following the recommendations of the Smith Commission, hastily set up by the unionist parties after the referendum. Legislation to give effect to these proposals is currently going through the House of Commons.

However, these steps appear not to have generated much interest or enthusiasm – or indeed even polling! Back in January at least, only 55% told Ipsos MORI that they had seen or heard anything about the report, while just 23% claimed actually to have read any of it.

Meanwhile, hazy though it might be there appears to be a widespread impression that the proposals are too timid. According to YouGov’s most recent poll just 35% think that the unionist parties are ‘completely’ or ‘partly’ delivering on their ‘vow’ to give the Scottish Parliament ‘increased powers’, 52% reckon they have delivered ‘very little’ or ‘have not delivered at all’, a finding that echoes those of the relatively limited number of  polls that have previously addressed this subject. Little wonder perhaps that independence is still so popular?