Are Voters Up for Yet More Debate about Constitutional Change?

It has become a common assertion that, while people might have been very involved in the debate about the independence referendum, they probably do not want to continue talking further about questions of devolution and UK governance. In particular people outside Scotland surely must be fed up with the continued preoccupation with such questions? However, a large UK-wide survey conducted by a team of researchers at the University of Edinburgh’s School of Social and Political Science with over 7,400[i] respondents comes to a different conclusion.

The survey focussed primarily on issues of constitutional change and people’s willingness to engage with such issues as well as politics more generally. In particular, it asked whether, since the independence referendum, too much, too little or the right amount of time had been spent on discussing how the UK was governed. What we found may be a surprise to some: only a minority said they thought too much time had been spent discussing constitutional change. Even when those who responded, “Don’t Know”, are left to one side, only 24% of people in Scotland felt that too much time had been spent on constitutional issues. Meanwhile, perhaps even more surprisingly, the proportion fed up with the topic was much the same in Wales (25%), England (27%) or Northern Ireland (29%). In fact, as Figure 1 shows, that the most common answer in every part of the UK was that too little time has been spent on discussing how the UK should be governed.

Figure 1: Evaluation of how much time has been spent discussing how the UK is governed[ii] (%); (excluding don’t know/refused respondents) 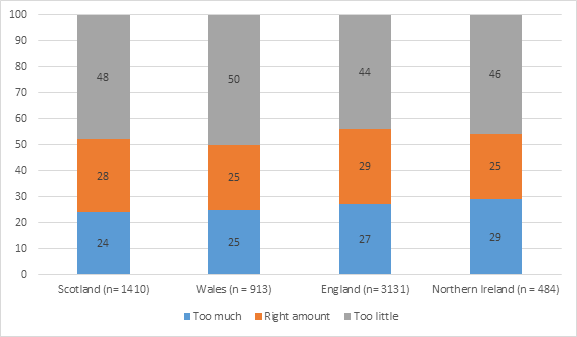 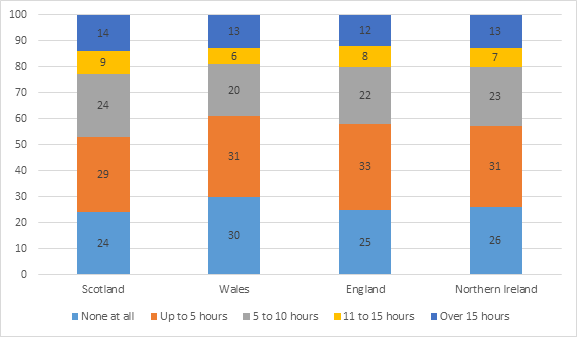 However, we should not mistake people’s interest in the debate and their willingness to engage with it for a belief that they can have much influence on the decisions that are made. When asked about how much influence different actors would have, ordinary people were seen throughout the UK as the group least able to make themselves heard. Overall, only 21% of people across the UK as a whole think they would be able to influence the discussions either “greatly” or “somewhat”. Politicians in local councils (28%), campaign groups (32%) and trade unions (38%) were all more likely to be regarded as influential, though not as much as businesses (55%). However, people in all parts of the UK were clear about who they thought would have most impact: political parties (73%) and Westminster politicians (77%).

Against this backdrop, it is not surprising to find only 23% of those we surveyed said they were “rather” or “very” satisfied with democracy in the UK (with slightly higher levels in Scotland (22%) and England (25%) than in Wales (17%) or Northern Ireland (18%). We are dealing with a population in which many have an interest in how they are governed and in which the majority are willing to engage actively with the topic. However, they also feel that the actual power rests with politicians and parties who often repeat in different media outlets the mantra that most people do not really care about these sorts of issues. That seems like a good reason not to be satisfied with the current state of democracy.

This research was funded by the ESRC and carried out by a team comprising of Dr Jan Eichhorn, Dr Daniel Kenealy, Richard Parry, Prof. Lindsay Paterson (all Social Policy) and Alexandra Remond (Politics and International Relations) at the University of Edinburgh. Detailed findings, methodological notes and written analyses, as well as sign up links to dissemination events can be obtained here.

[ii] Question wording: “Following the referendum on Scottish independence in September 2014, a wide range of proposals have been made for changes in the way the UK is governed. Do you find that there has been enough time to discuss all ideas, do you think the process is happening too fast or do you think too much time is spent on this discussion?”

[iii] Question wording: “If you were offered to take part in such a process of a constitutional convention, how much time would you be willing to spend over a period of one month, if any at all?”

How Scotland should be governed