Yesterday, the House of Commons finally had its big devolution debate, discussing both the commitment to further Scottish devolution set in train by the Scottish No vote and the ‘English Question’. David Cameron of course had linked the two together when he spoke to acknowledge the victory of the No side at breakfast time on 19th September. Having heard the voice of Scotland in the referendum, Cameron now felt, ‘the question of English votes for English laws – the so-called West Lothian question – requires a decisive answer’, one which William Hague has been tasked to find.

Was Cameron right? We can throw at least some light on that question through the findings of the latest Future of England Survey, published yesterday and based on fieldwork carried out in April 2014. Our earlier surveys, conducted in 2011 and 2012 showed a strong sense of dissatisfaction with how England is currently governed, but rather less clarity about the alternatives. There was little support for regional government or the renewal of local democracy as a way of addressing that dissatisfaction. But opinion appeared split between English votes on English Laws (or EVEL as it has become known), that is the introduction of special procedures for legislation on England in the House of Commons, and the establishment of a free-standing English Parliament.

In the 2014 survey EVEL appears to have become the preferred option. We are able to show this in two ways: by asking people which option they most prefer when EVEL is one of a set of possible options put before them, and by comparing the level of support for EVEL with that for other options when people are asked their views about each option separately.

In the 2014 survey people were presented with three different sets of possible options for the future governance of England with EVEL one of the options in each case. The pattern of responses for all three sets is shown in Table 1 below. The table shows:

* That support for status quo is relatively low – in these questions at no more than 25%;
* That support for regionalism is very low; and,
* That EVEL is the lead preference irrespective of the alternative options for the future governance of England it is placed alongside. 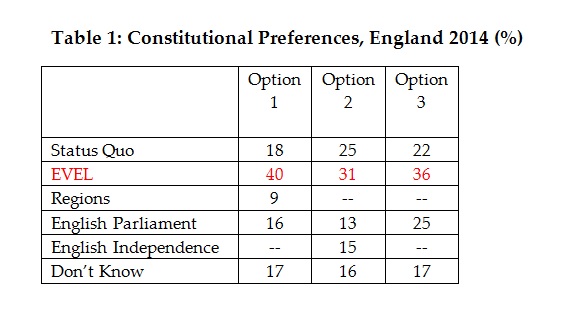 Excluded from these sets of possible alternatives, however, are two additional options that have occasionally been touted as ways of addressing the English question. These are a Secretary of State for England with a seat in the UK cabinet, and the appointment of a UK Government Minister for each English region (as was rather half-heartedly implemented by the Labour Government in the early 2000s). As these options are not (at least logically) mutually exclusive, either with regards each other or to other options such as EVEL or an English Parliament (Scotland currently has both a Secretary of State and a Parliament), it did not make sense to force respondents to choose between them. We therefore simply asked our respondents whether they agreed or disagreed with these two ideas, as we also did the longer established alternatives. The results are reported in Table 2.

Given the exploratory nature of these options, and the lack of public debate around some of them, care is required in interpreting these results. Two points are nonetheless worth making. First, all options for change garner majority support, pointing to the extent of disaffection with the status quo and an appetite for change that challenges the current operation of Westminster/Whitehall in England. Any change, it seems, will do. Second, it is clear that EVEL is the option that wins the most and strongest support, with over two-thirds agreeing and 40% agreeing strongly that ‘changing the rules in Parliament so that only English MPs can vote on laws that would only apply in England’ is the way ahead.

So, perhaps the Prime Minister had a point. EVEL now looks like the preferred option in England. What, precisely, ‘EVEL’ would mean for the Prime Minister in practice, and how it would be implemented, is another matter entirely. We have heard little yet from William Hague, and we are certainly none the wiser after the House of Commons debate yesterday, which failed to cast either light or heat on the matter. Given that support for the status quo is so low, surely it is time to take England, the English and their views about how they should be governed a little more seriously than that?

This blog is co-authored by Richard Wyn Jones, who is Professor of Welsh Politics and Director of the Wales Governance Centre at the University of Cardiff

Charlie Jeffery is Director of the Academy of Government at the University of Edinburgh. He also coordinates the Future of the UK and Scotland programme of the Economic and Social Research Council.

How England should be governed