Since our last contribution to this site both the online and offline campaigns have been in full swing. Offline there has been door-to-door canvassing, leafleting, parades, bands, creative art projects, banners, posters, the sporting of lapel badges and T-shirts, countless interventions from industry figures, politicians, and celebrities, and two set piece televised debates between the two campaign leaders. Now, new data from our AQMeN project on referendum activity on social media shows that online campaign activity has increased too, and especially so during the last three weeks.

Our analysis is based on a record of the social media activity of the two main campaigns, ‘Yes Scotland’ (YS) and ‘Better Together’ (BT) obtained by monitoring their respective Facebook and Twitter accounts on weekdays since August 2013. The first observation this uncovers is that both campaigns have been tweeting more, posting more on Facebook, and been generating greater engagement among the online public as the campaign has progressed. This is evidenced by the increased number of Twitter followers for each campaign, more and more people liking each campaign’s Facebook page, and the growing number of people discussing the two campaigns online. This is particularly true of the past three weeks, which have coincided with a number of important campaign events, beginning with the second debate between the two campaign leaders Alex Salmond and Alistair Darling on 25 August 2014. Since then, there has been a significant increase in the number of likes for both campaigns (approx. 65k for YS and 32k for BT) and a particular surge in the number of Twitter followers for each campaign (just over 27k for YS and nearly 9k for BT). The increase in online engagement at the time of the TV debate matches the experience in Germany on the occasion of the TV debates between the leading candidates in the 2013 general election.

But the TV debate is not the only campaign event that has stimulated online activity – surges also coincided with the airing of the so-called ‘Patronising BT Lady’ TV advert in which a hypothetical uninformed middle-class female voter talks herself into voting ‘No’. Also during this period a YouGov opinion poll was released that put Yes ahead for the first time, followed by a seemingly panicked dash by the three main Westminster leaders to Scotland, as well as the countless warnings from many prominent business and industry players of the implications of a ‘yes’ vote.

The second observation that emerges from our latest data is that the YS campaign continues to have and has indeed widened its advantage in generating enthusiasm on social media. Consider Facebook likes, for example. The green line in Figure 1 tracks the difference between the number of Facebook ‘likes’ each campaign’s page has received. It is calculated by subtracting the likes for the BT campaign’s page from the likes for the YS page. The YS page has enjoyed a consistent lead in likes over the BT campaign, a lead which grew steadily in June and July 2014. The only slight narrowing of this gap coincided with the first television debate between the two campaign leaders, on 5 August 2014 when the general consensus was that Alistair Darling had outperformed Alex Salmond.

Nonetheless, the gap between the two campaigns soon stabilised, while there has been a marked further widening of the gap since the second TV debate between the two campaign leaders on 25 August. Whereas the difference between the two campaigns on 25 August stood at about 57k likes, today the YS page had been liked almost 90k more times than the BT page. There was a general consensus that Salmond bettered Darling in the second debate, and coupled with an outpouring of critiques over the ‘Patronising BT Lady’ TV commercial that was aired soon after, a narrative developed amongst many online participants that the BT campaign had scored two own goals in quick succession.

Meanwhile, the purple line in Figure 1 shows the difference between the number of people ‘following’ the Yes Scotland Twitter account (@YesScotland) and those following the Better Together one (@UK_Together). On this measure, The YS camp has maintained a consistent lead over BT that widened over the summer and especially so after the second TV leader debate on 25 August. Whereas the difference in followers stood at just over 29,000 before the second debate, at the time of writing the difference stands at just over 50,000.

The orange line in Figure 1 illustrates the difference in the number of tweets emanating from each campaign’s account. While the BT campaign had the advantage on this metric up until spring 2014, the YS campaign surpassed it in March and its lead has continued to increase thereafter. Since then, YS have been more active on Twitter than BT, and at the time of writing, the YS campaign has tweeted about 2500 times more than the BT campaign. Although the YS campaign’s advantage on this metric has not varied in response to particular campaign events, YS has consistently increased the volume of its tweeting significantly during the official campaign that began at the end of May. And if you are giving your supporters more tweets to re-tweet and share on Facebook then your potential for both audience reach and message control is arguably going to be much greater. 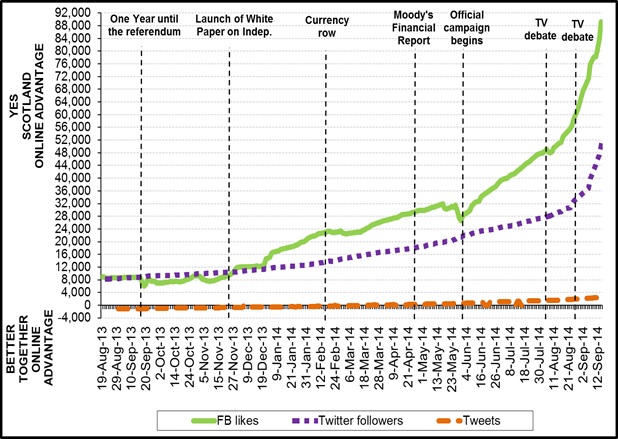 Liking a Facebook page or following a Twitter account is indicative of interest. Nonetheless, they are among the easier forms of online interaction with the campaigns. To measure depth of engagement Figure 2 examines the extent to which both campaigns have been ‘talked about’ on average on Facebook during the previous seven days. This ‘talked about’ metric measures the ‘interaction’ with each campaign’s page, as indicated by the average number of likes per page, the number of posts to a page wall, the level of liking/commenting/sharing of a wall post, and the number of phototags. It thus provides us with a more detailed indication of people’s engagement with the campaigns.

There are two striking points. The first is that as the campaign has developed, each of the campaigns has been “talked about” more. The growth started in August 2014, six weeks before referendum day, following the close in early August of the Commonwealth Games. and was particularly notable on the occasion of the two TV leader debates. However, it should be noted that the extent to which the campaign is discussed on Facebook depends on how much new material is added to this page as well events in the campaign. 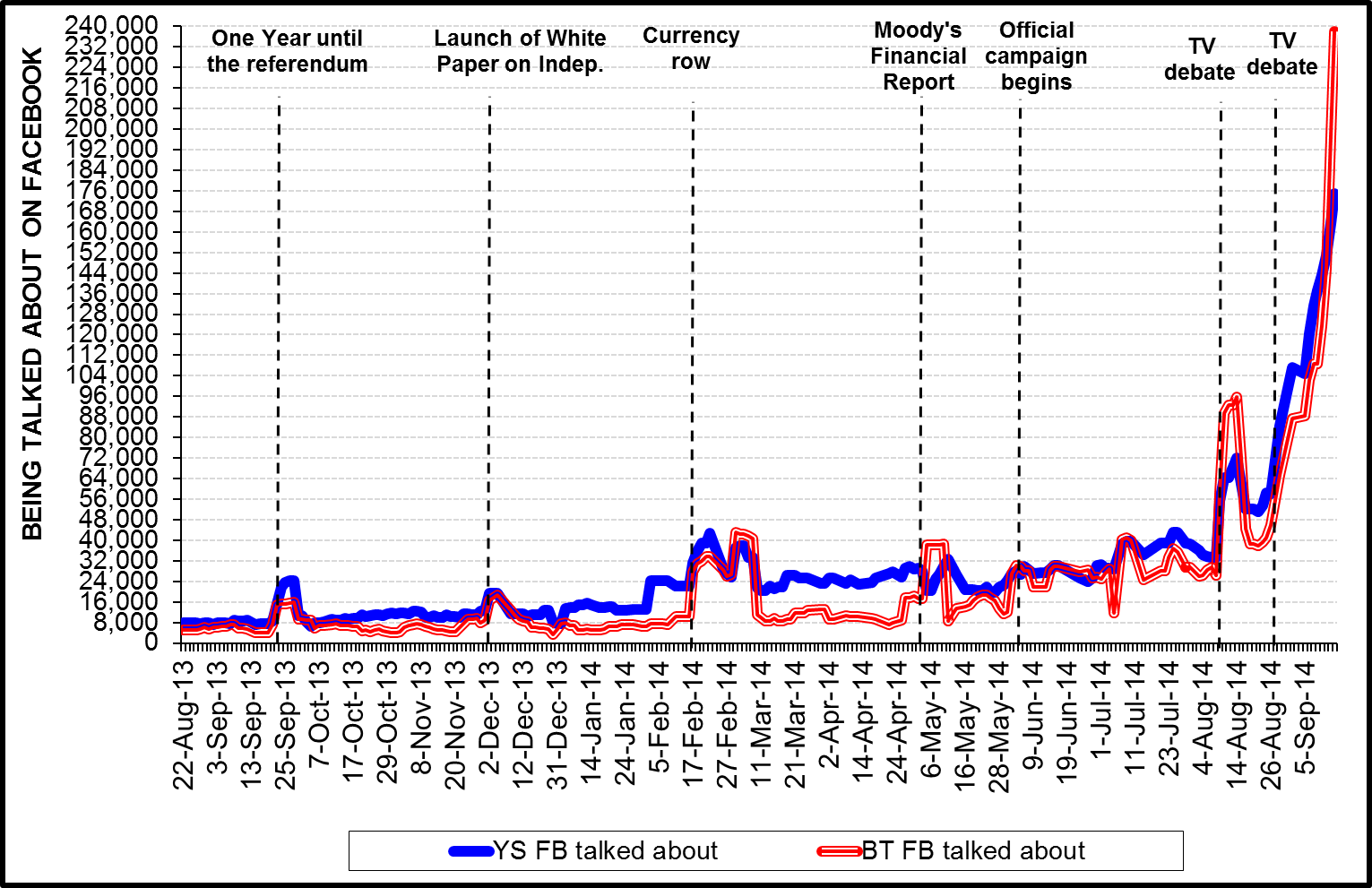 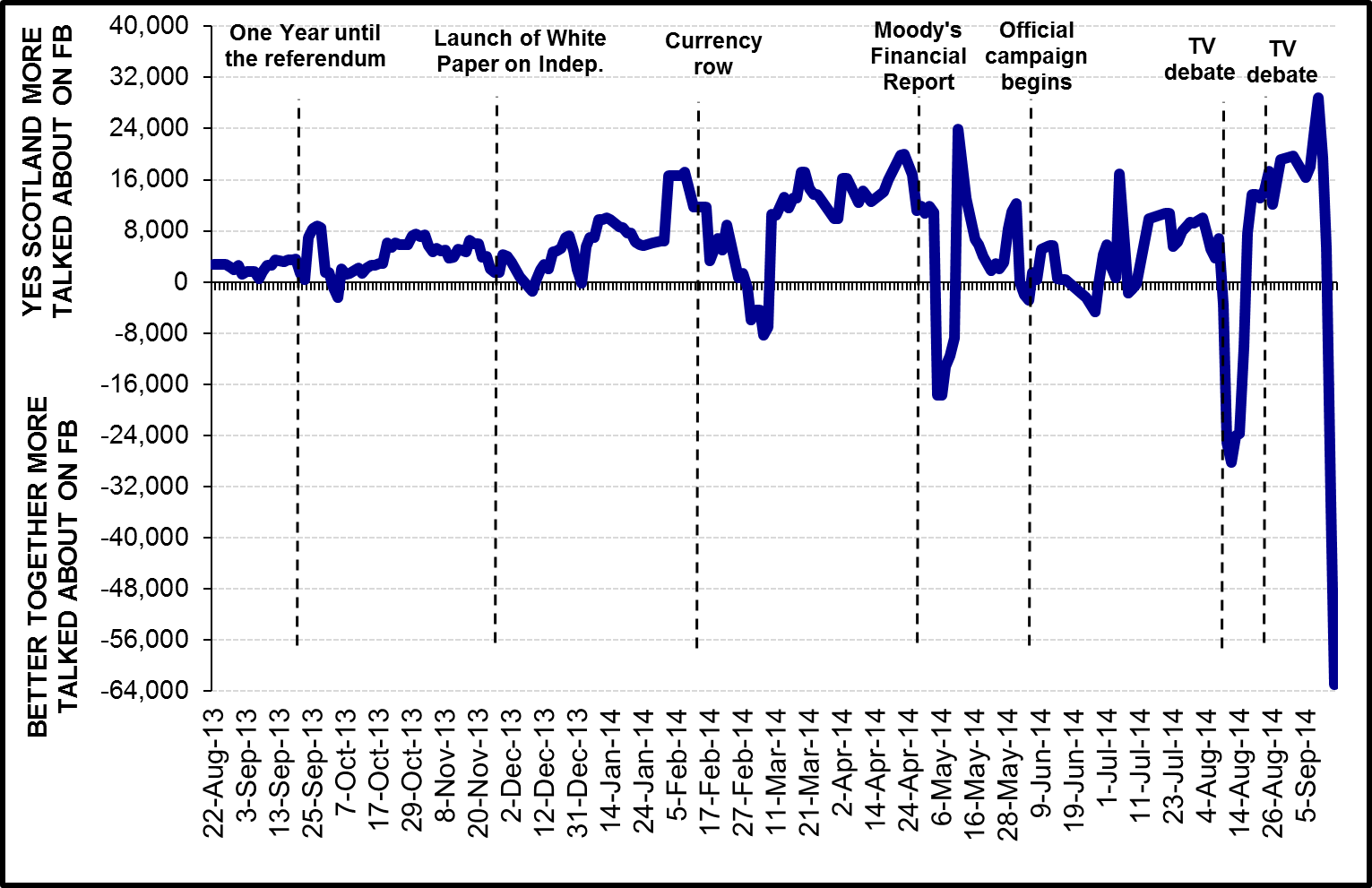 Figure 3 ‘Yes Scotland’ (YS) score minus the ‘Better Together’ (BT) score for Facebook being talked about, August 2013-September 2014.

Figure 3 illustrates the difference in the extent to which the two campaigns were “talked about” and shows that for the most part, the Yes side has been discussed more. The lead on this for the YS campaign peaked following Salmond’s perceived victory in the second TV leaders’ debate as well as the BT lady commercial, which sparked an outpouring of humorous memes online. However, there have been two very marked occasions during the formal campaign period when the BT page has outstripped the YS campaign page in terms of Facebook discussion. The first coincided with the first debate, where undoubtedly the BT campaign was buoyed by Alistair Darling’s perceived better performance vis-à-vis Salmond. The second spike has come in the last few days and coincides with the last minute dash to Scotland of the Westminster leaders and the interventions of several industry players on the allegedly adverse consequences of independence for jobs and the economy in Scotland.

With just over 48 hours until the polls open, it is evident that we have seen a significant increase in the numbers of people engaging with the two campaigns online. And while we should not overestimate the numbers of people engaging with the referendum online, the surge in online interest in the two campaigns is noteworthy given the apparent closeness of the race as it now stands. In a tight race enthusing even small segments of the electorate could prove crucial.

Our latest data thus confirm our earlier observation (June 2014; February 2014; November 2013) that the Yes side holds the advantage when it comes to generating enthusiasm online. This advantage is unlikely to be challenged during the limited campaigning time left. In our last contribution we speculated as to why the Yes side had developed an online advantage. Rather than repeat this analysis, we instead want to consider the possible impact of the online behaviour we have charted throughout the campaign. Previously, we argued that the challenge for the Yes side was to translate its evident advantage online into support. Now the gap between the two sides has indeed narrowed. What we would note is that at some of the junctures when the Yes side has extended its online advantage have coincided with small increases in Yes vote support (for example, the launch of the Scottish Government’s White Paper in November 2013; the start of the official campaign in late May 2014, and the TV debates between the two leaders). Whilst it is impossible to infer any form of causation without taking into account a multitude of other factors, it is at least noteworthy that increased online activity has sometimes coincided with increased Yes support. It is therefore at least possible that the YS campaign has succeeded in translating what could be considered a winning social media campaign into support on the doorsteps of Scotland. The key question remains as to whether that will prove to be enough to ensure victory? We should know early morning Friday.

This contribution was co-authored with Dr. Stephen Quinlan, senior researcher at the GESIS Leibniz Institute, Mannheim and a research fellow on the ESRC/AQMeN Future of the United Kingdom and Scotland research project focusing on the impact of social media on the Scottish independence referendum.

Dr Mark Shephard is senior lecturer in politics at the University of Strathclyde and is principal investigator on the ESRC/AQMeN Future of the United Kingdom and Scotland research project focusing on the impact of social media on the Scottish Independence referendum.