Tracking the Polls: Rapid Movement to Yes, but is it Enough?

Since the YouGov/Sunday Times poll last Sunday, September 7th, reported a narrow Yes lead and prompted the current crisis reaction from both political parties and news organisations, the polls have been very consistent. They have ranged from the Survation poll on September 9th at 47% for Yes to the ICM poll on September 11th at 49%. Combining all the polls to date using the statistical method explained in my last blog shows a 4.5% shift towards Yes in the last month. The current estimate of Yes support (48%) is the highest yet, but a Yes victory is still outside the margin of error.

There is little point in trying to interpret (or rather over-interpret) the results of individual polls. For example the Times headline on Friday declared “Support for an independent Scotland on the slide”, because the latest Times/YouGov poll put support for independence at only 48%, 3 points less than the YouGov poll published the previous Sunday. The problem is that individual polls have a considerable margin of error, typically ±3%, so the movement between these two polls could simply be sampling error. However, we can get a clearer picture if we combine polls. In response to another YouGov poll published by the Times on July 1st (which, it was claimed, threatened “to leave Alex Salmond’s hopes in tatters”), I used a statistical method developed by Professor Simon Jackman of Stanford University. Here I apply this method to the latest data.

The method works in a similar way to a poll of polls. Its advantage is that it simultaneously estimates the bias (“House effects”) of each polling organisation along with underlying support for independence. For this reason it is not sensitive to which polling company happens to have published polls recently. For more details see my previous entry and Jackman (2005). 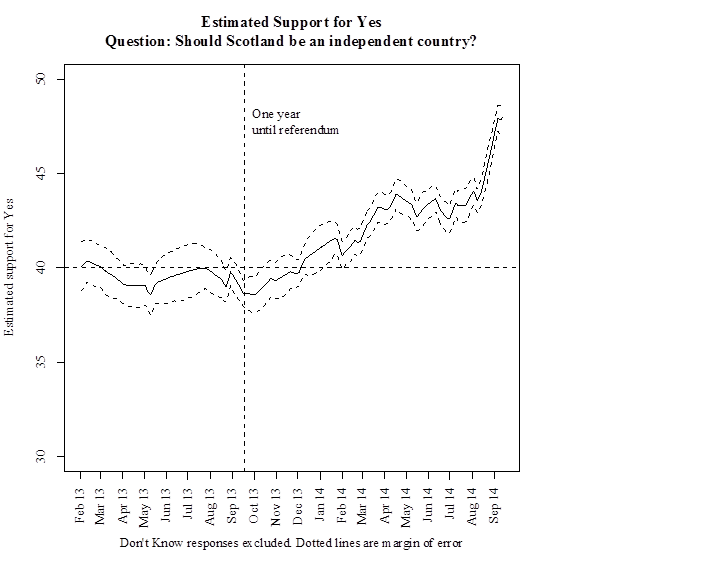 As the figure shows, we see a very strong increase in support for Yes in the past month – around four and a half points. However, support for Yes is still significantly short of 50%. The latest estimate is 48.0%, the highest to date, with a margin of error of plus or minus 0.87%. Thus a Yes victory is not within the margin of error. (The margin of error of our estimate is far smaller than the ±3% typical for individual polls, because it combines information from many polls.) There is, however, a caveat. It is possible that all of the polls are systematically biased in one direction or another. I have assumed that the polls are on average accurate, because that is all the information we have. (For general elections, we can consider how accurate a polling house was last time, but there is no last independence referendum that can be used as a yardstick.) And of course, the vote is not until next Thursday. Momentum seems to be on the side of the Yes campaign, but if the polls are accurate, a Yes victory will require substantial further gains in support.

These results are very close to those of the poll of polls reported on this site. This is not surprising as the recent poll results from various polling organisations have been very similar. This contrasts with earlier in the campaign when the different polling houses varied by over 10%. What is now confusing is that some polls show movement while others do not. Polls conducted by YouGov and TNS-BNRB previously produced comparatively low estimates of Yes support. Recently, however, these polls have shown an increase in Yes support as the number of “Don’t Knows” has decreased. However, other polls, such as those conducted by Panelbase and Survation have reported higher Yes support in the past, but these polls have not moved recently. The result is a convergence of the various polls.

For those who are interested, below we show the House effects as estimated by our model. Each figure represents the amount by which each company’s estimate of the Yes vote has tended to be lower or higher than the norm across all polls.

Anthony McGann is Professor in the School of Government and Public Policy at the University of Strathclyde.