Favouring not one union, but two: New evidence from the under 18-year olds

Following on from a similar survey conducted in April and May 2013 a team of Edinburgh University researchers, funded by the Economic and Social Research Council through its Future of the UK and Scotland Programme and working under the umbrella of the Applied Quantitative Methods Network (AQMeN), has conducted a new survey of 14 to 17 year olds in Scotland. For this telephone survey (again conducted in April and May)  – the only representative and comprehensive survey of the views of this age group on the referendum – 1006 young people were interviewed, of whom 726 will be 16 or older and thus eligible to vote on 18 September 2014.

There has been a substantial swing to Yes in referendum vote intentions as compared with 2013. Amongst the sample as a whole, 30% now back a Yes vote compared with 23% in 2013.  In contrast, the proportion saying they favour a No vote has fallen from 58% to 52%.  This means that once the Don’t Knows have been excluded there has been a nine point swing to Yes, from 28% last year to 37% now.

The results for those who will actually be eligible to vote in September are, at 29% Yes, 52% No are almost identical. Once the Don’t Knows are excluded, 36% say they will vote Yes.

So while there has been a substantial increase in support for Yes (as the polls suggest there has been in the population as a whole), still a clear majority of under-18 year olds want Scotland to remain in the Union. The youngest age group therefore continues to show a lower level of support for independence than either young adults in particular or the overall adult population as a whole. (The lowest level of support for Yes registered by any poll during April and May was 39% (after Don’t Knows are excluded) while on average all of the polls conducted in May put the Yes vote at 43%.)

The newly enfranchised voters continue to express a strong desire to participate in the referendum. As many as 72% now say that they are very or rather likely to vote compared with 66% in 2013, and not dissimilar to the equivalent figures for adults as a whole. Only 12% say they are very or rather unlikely to vote. If 16 and 17 year olds do participate in the referendum on anything like this scale, it will provide ammunition for those who wish see the voting age lowered to 16 more generally.

However, this year’s survey also covered some new ground, and in doing so uncovered an intriguing result. Adults in Scotland tend to have a rather negative view of the EU(if not necessarily as negative as those south of the border); according to the 2013 Scottish Social Attitudes survey, 59% either want Britain to leave the EU or for the EU’s powers reduced (see Figure 1). Younger Scots, in contrast, hold a more favourable attitude towards Europe. Hardly any 14-17 year olds (just 5%) wish to leave the EU altogether while only a further 22% would like to see the EU’s  powers reduced – in short just 27% of 14-17 year olds can be classified as ‘Eurosceptics’. Conversely 44% of young Scots are happy with the situation as it is while 23% want to see even more powers transferred to the European Union. 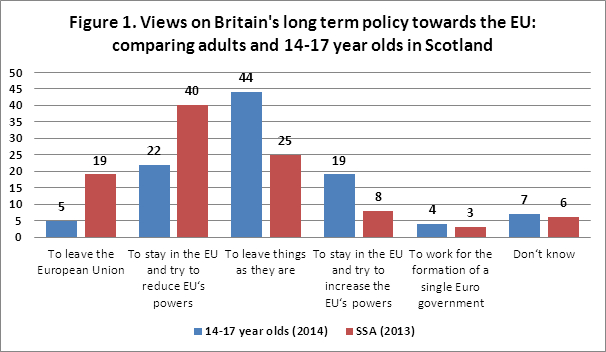 In discussing the results of last year’s survey we suggested that perhaps young Scots have a more international outlook than their elders, and were less interested in being defined by a border. That contention now appears to be confirmed. Although support for a Yes vote has increased, most of the newly enfranchised voters still support the Union with the rest of the UK – alongside UK’s union with the rest of Europe.

A briefing presenting the core results of the survey is now available on the AQMeN website. You can also examine much of the data on What Scotland Thinks.