Attitudes to Gaelic and to Scottish Autonomy

The status of national languages has been a source of controversy in many movements seeking autonomy for a small nation, such as, for example, those in Ireland and Wales. Yet Scotland seems to be an exception. Support for the Gaelic language has never been closely linked with campaigning  for Scottish political autonomy. But does that continue to be the case during the referendum debate?

Our evidence comes from the 2012 Scottish Social Attitudes Survey. We assess whether those who are supportive of Gaelic have different views about Scotland’s constitutional future from those who are not so supportive.

People’s support for Gaelic is measured by their hopes for the future number of Gaelic speakers. We compare the  constitutional preferences of the 42% of the sample who would like there to be more Gaelic speakers in 50 years’ time with those of the 39% who want the number to be unchanged  and the 10% who hope there will be fewer.

People’s constitutional preferences are measured by a question that asks them how policy responsibilities should be divided between Holyrood and Westminster. They are asked to choose between Holyrood being able to make all decisions (i.e. full powers or independence), Holyrood being responsible for everything apart from defence and foreign affairs (maximal devolution), Holyroood having responsibility for all domestic affairs apart from taxation and welfare (broadly as at present), and Westminster taking all decisions (no devolution).

Figure 1: Support for constitutional options, by preference for future of Gaelic 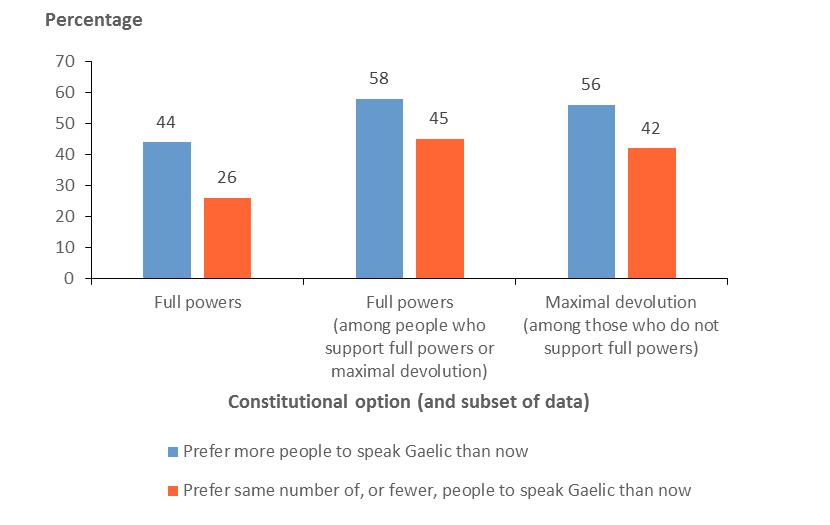 The third pair of bars focuses on the choice between maximal devolution and the Scottish Parliament having fewer powers than that (either its existing powers or abolition). There is a similar pattern – there is more support for greater autonomy among those who want more Gaelic speakers.

However, these relationships between attitudes to Gaelic and support for greater Scottish autonomy may be misleading. Perhaps attitudes to Gaelic are standing in for other factors that affect views about the constitution. For example, there is a relationship between national identity and wanting more Gaelic speakers. Among people who feel ‘Scottish not British’, 51% would like there to be more Gaelic speakers; in contrast, the proportion is only 21% among the group who feel ‘British not Scottish’. People who feel more Scottish are also more likely to want maximal devolution or independence than those who feel more British. So it could be that the association of the Gaelic measure with attitudes to Scottish autonomy is merely reflecting the association of both of these with national identity.

The way to get round this problem statistically is to ‘control for’ those other factors that are associated with views about Scotland’s constitutional future – factors such as sex, national identity and economic expectations of independence – and see if the association between support for more autonomy and support for Gaelic still remains in place.

Figure 2 shows that, after these controls have been introduced, the relationship between attitudes to Gaelic and greater Scottish autonomy is weakened but not eliminated. For example, as the first pair of bars shows, support for independence is 10 percentage points higher amongst those who want more Gaelic speakers than it is amongst those who do not. It will be remembered that the equivalent gap in Figure 1 was 18 points.

Figure 2: Support for constitutional options, by preference for future of Gaelic (adjusted for controls) 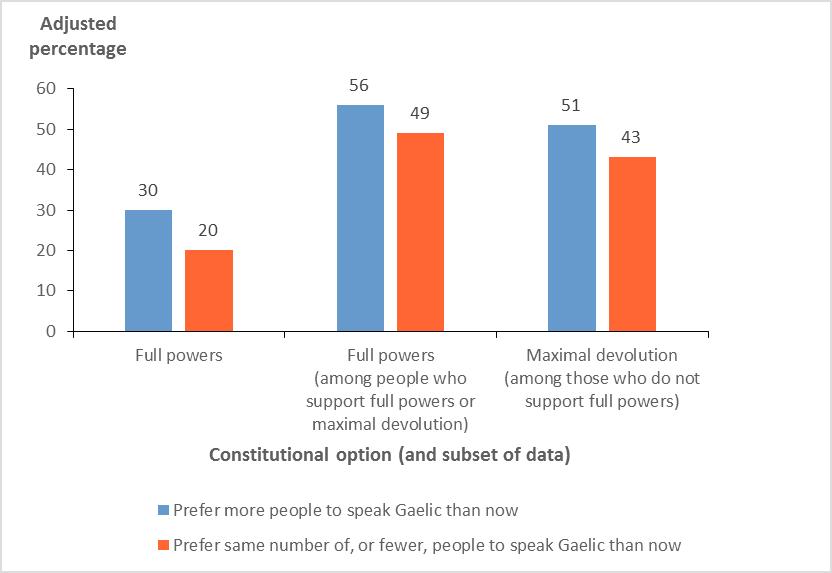 Much the same result is found when we look at the other two pairs of constitutional choices, although the statistical significance of these differences was weaker (p-values of <0.001, 0.15 and 0.09 respectively).

Given that we are analysing a survey that measures views only at one point in time we cannot necessarily conclude that people support more political autonomy because they support the Gaelic language. Influence may flow in the opposite direction. Nevertheless, we can say that Gaelic and support for autonomy are connected with each other. The old view that there is no language question in the politics of Scottish autonomy may have to be revised.

This blog is co-authored by Fiona O’Hanlon who is a research fellow in the Gaelic research network Soillse, based at the University of Edinburgh. She moves in August to the University’s School of Education.

Acknowledgements
The research was funded by the ESRC (grant number Es/J003352/1), Bòrd na Gàidhlig, and the Scottish Government.  The views expressed here are those of the authors alone.

Lindsay Paterson is Professor of Educational Policy in the School of Social and Political Science, University of Edinburgh. His main research interests are in education, civic engagement and political attitudes. Under the auspices of the Applied Quantitative Methods Network (AQMeN), he is involved in several ESRC-funded research projects that are analysing public attitudes relating to the Scottish independence referendum.

How Scotland should be governed National identity and cultural issues