Who will turn up and who will stay home? The potential impact of differences in turnout

We have seen a tightening of the referendum race during the first few months of 2014. Although  ‘No’ remains in the lead in all of the polls and in many still substantially ahead, its share of the vote on average in March and April has been (once Don’t Knows are excluded) just 55%, well down on the 61% share it enjoyed before Christmas. This tightening means that ascertaining what might make a point or twos difference either way on polling day has become of increased interest.

One such possibility is that supporters of one side might vote more heavily than those backing the opposite camp. In any election or referendum there is no guarantee that the result will accurately reflect the views of the population as a whole. Some sections of society may be less inclined to turn out to vote than others. Indeed, identifying such voters and (if sympathetic to their cause) trying to mobilise them to get out and vote is one of the objectives of any election or referendum campaign.

That said, it looks as though we are heading for a high turnout overall in September. Figure 1 summarises the results from four polling companies that have been regularly asking respondents how likely they are to vote in September. In recent months between 70 and 80 per cent have said they are certain to vote – far higher than the 50% who actually turned out in the last Scottish Parliament election in 2011.  Indeed interest in the referendum seems to be even greater than for a UK general election; in a recent poll conducted by Survation 75% said they were certain to vote in the referendum, compared with 63% who said the same of the next UK election.

Figure 1: Percentage of respondents ‘certain to vote’ in the 2014 referendum by polling company over time 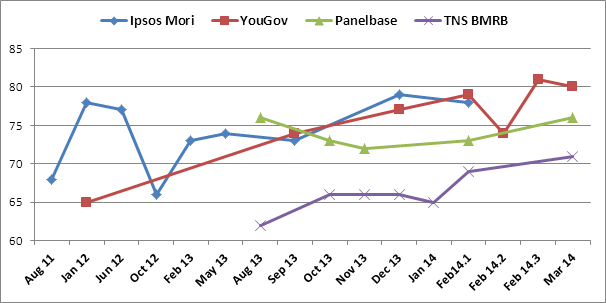 So the vast majority seem set to cast a vote, thereby helping to ensure that the result is accepted as definitive by all sides. That said, however, it is still possible that the supporters of one side could end up being more likely to vote than those who back their opposite point of view.

Evidence from the 2013 Scottish Social Attitudes Survey (SSA) suggests this prospect cannot be discounted. Amongst those who say they have made up their mind how to vote, slightly more Yes supporters (90%) than No ones (86%) say that there is a better than evens chance that they will vote (see the left hand side of figure 2). This gap grows bigger when we take into account too those who say that have not definitely decided which way they will vote but who say they are inclined to vote one way or the other. As many as 91% of less committed voters on the Yes side say they are likely to make it to the polling station, but only 73% of their No counterparts say the same (right hand side of figure 2).  If we combine the responses of these two sets of Yes and No supporters (see the middle panel of figure 2), we find that whereas 90% of Yes supporters say there is a better than evens chance of their voting in September, only 83% of No backers say the same.

So it seems that No supporters, and in particular those less committed to the message of the Better Together campaign, are somewhat less motivated to turn out and vote on 18 September. If the differences in voters’ reported likelihood of voting in the SSA survey were to be fully reflected in practice, this would be enough to boost the Yes vote by two percentage points – not a huge difference, but potentially important if the race were to become even tighter. Recent opinion polls have found a similar result. In the four most recent polls shown in figure 1 Yes supporters were on average six points more likely to say they were certain to vote – enough to add 1.5 percentage points to the Yes vote.

It might be thought that Yes voters are simply the kinds of people who are always more likely to turn up and vote.  Not so. According to the 2011 SSA those who backed independence were no more likely to vote in that year’s Scottish Parliament election than those who simply preferred more devolution or the status quo. It seems that the opportunity to vote for independence has engendered an enthusiasm to vote amongst Yes supporters that is not fully reciprocated amongst backers of the No side. Better Together may need to persuade some of their supporters that staying in the Union is worth the trouble of casting a vote.

Further details of our analysis of the prospects for turnout in the referendum are to be found in the briefing paper ‘Who will turn up and who will stay home?‘