Racing Ahead Online: Catching Up Offline?

Last November, we observed that the ‘Yes’ side had a more visible and active online presence than the No’ camp. Since our last blog on this subject, the referendum campaign has intensified considerably, thanks not least to the launch of the Scottish Government’s White Paper on independence at the end of November 2013, the row about whether an independent Scotland would or would not be allowed to use the pound as part of a monetary union with the rest of the UK, and comments by the European Commission President Jose Manuel Barroso casting doubt on Scotland’s membership of the EU in the event of a ‘yes’ vote. New data from the ESRC/AQMeN project tracking referendum activity on social media suggests that the Yes Scotland campaign has solidified its lead over the Better Together campaign in terms of activity and interest on social media. 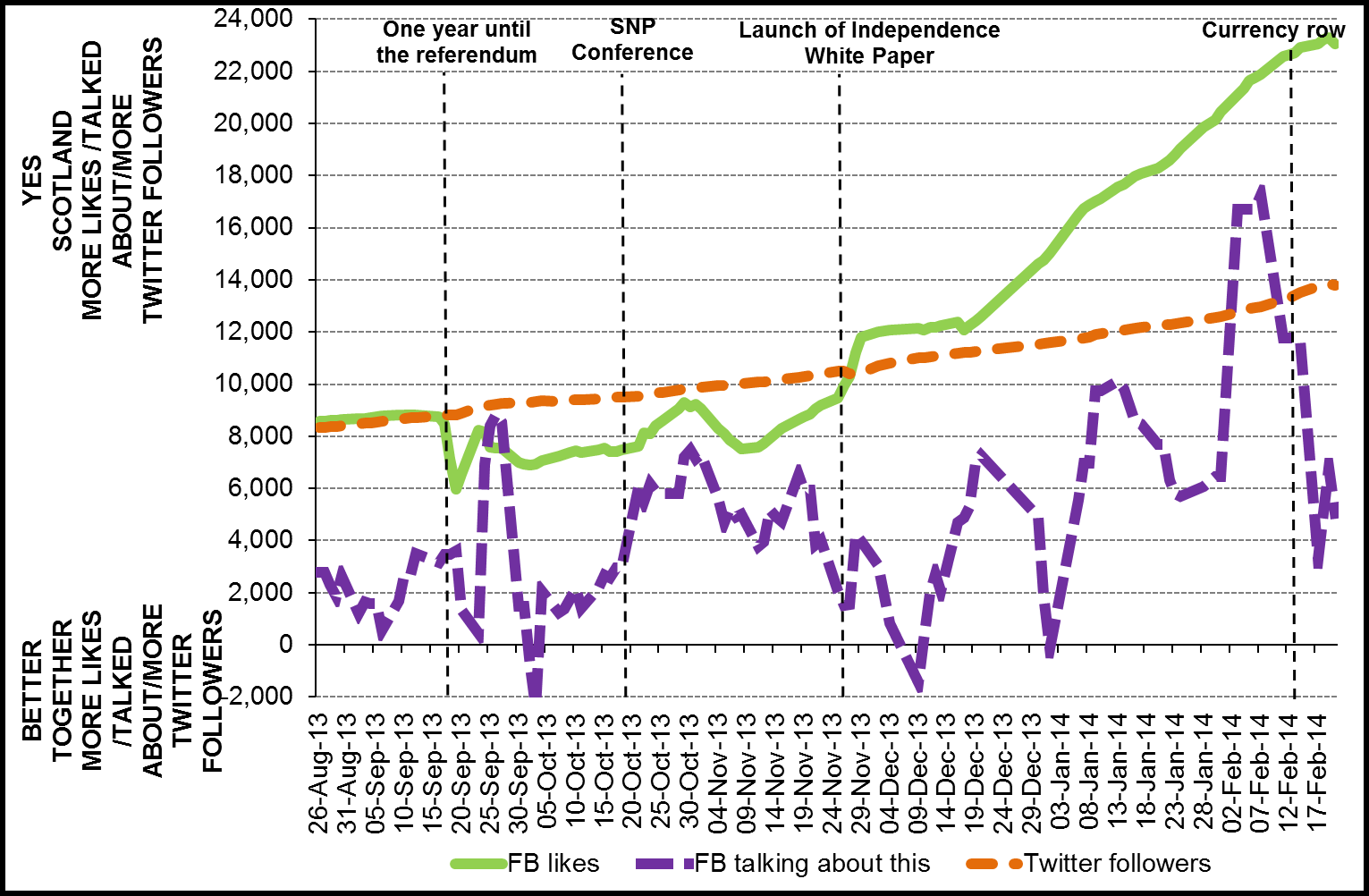 Our analysis is based on a tracking of the social media activity of the two main campaigns, ‘Yes Scotland’ (YS) and ‘Better Together’ (BT), by monitoring their respective Facebook and Twitter accounts since August 2013. Figure 1 compares the performance of the two campaigns on three measures, two in respect of Facebook and one on Twitter. First of all, the green continuous line tracks the difference in the number of Facebook ‘likes’ each campaign’s official Facebook page has received. It is calculated by subtracting the likes for the ‘Better Together’ campaign’s page from the likes for the ‘Yes Scotland’ page. Second, the purple broken line represents a measure of the extent to which the two sets of campaign Facebook pages have been ‘talked about’ on average during the previous seven days. It is based on the level of ‘interaction’ with each campaign’s page, as indicated by the average number of likes per page, the number of posts to a page wall, the level of liking/commenting/sharing of a wall post, and the number of phototags. Finally, the orange dashed line in Figure 1 shows the difference between the number of people ‘following’ the Yes Scotland Twitter account (@YesScotland) and those following the Better Together one (@UK_Together).

So how have the differences in the number of ‘likes’ for the two campaigns’ Facebook pages (the green solid line in Figure 1) evolved as the campaign has progressed? Likes for a Facebook page can be interpreted as a measure of interest and/or support for a campaign and, given it requires minimal effort (just a click of a button), is the easiest way for an individual to engage with the social media campaign of either side. Our data show that the YS campaign has consistently received more likes than the BT campaign. Furthermore, since the launch of the White Paper on independence on 26 November, the gap between them has increased. On average, before the White Paper was launched, the YS Facebook page had been liked on around 8,000 more occasions than the BT campaign. Since the launch of the White Paper on 26 November, that average gap has grown to about 17,000. At the time of writing, the YS Facebook page had been liked on no less than 23,000 more times than its BT counterpart.

The Facebook ‘talked about’ metric (represented by the purple broken line) is a more detailed indicator of how much people are engaging with the two campaigns. ‘Talking about’ a campaign, by, for example, commenting/sharing a wall post, or tagging a photo, requires a greater level of effort on the part of the user than simply liking a page. On this measure, engagement with each of the campaigns tends to ebb and flow, partly because the metric represents a seven day average but also in response to key events, as the figure illustrates.  For example, we observe a spike in the number of people ‘talking about’ both campaigns around the time of the launch of the White Paper. Similarly, we have seen an increase in interactions on Facebook for both campaigns during the last week in the wake of the currency row and the comments from the EU Commission President.

But the figure shows that the YS campaign has consistently been the more talked about. Of the 121 time points represented on the figure, the BT campaign was the more talked about on only two occasions. The recent intervention by the Governor of the Bank of England in the currency debate coincided with the ‘Yes’ side’s largest lead on this metric since we began monitoring at the end of last summer. And while the BT campaign’s FB page has received a lot more attention in the last week in light of recent events, the YS FB page still remains more ‘talked about’.

The number of Twitter followers (denoted by the orange dashed line) also shows that the YS campaign has been engaging more people than has the BT campaign. This gap has been steadily widening over the past six months. In August 2013, the gap between the campaigns was approximately 8,000. At the time of writing the YS campaign had accumulated 13,804 more Twitter followers than the BT campaign. This lead has increased steadily over time and does not appear to be affected markedly by events.

It is clear that, at least so far as the official campaigns are concerned, the Yes side to date has been coming out on top in terms of generating enthusiasm online. But this begs the question as to why so far, at least, this has not translated into a lead for the Yes side in the opinion polls. In part the answer may lie in the fact that younger people are more likely to use Facebook and are also rather more likely to be in favour of independence. But more importantly, we can expect that visitors to a campaign’s Facebook pages and followers of their Twitter accounts are likely to be sympathetic to that campaign’s cause in the first place. The social media world is more one where the committed interact with each other rather than one where converts are made.

Waging a campaign online and maintaining a sufficient online presence is an important part of modern day campaigning. But winning the online enthusiasm battle is not enough. The challenge for the ‘yes’ side over the next seven months is to translate its evident advantage in communicating its message in the virtual world of social media into greater support on the streets and doorsteps of Scotland.

This blog piece was co-authored with Dr. Mark Shephard, principal investigator on the ESRC/AQMeN Future of the United Kingdom and Scotland research project focusing on the impact of social media on the Scottish independence referendum and Senior Lecturer at the School of Government and Public Policy, University of Strathclyde.

Dr. Stephen Quinlan is senior researcher at the GESIS Leibniz Institute for the Social Sciences, Mannheim and is part of the ESRC/AQMeN Future of the United Kingdom and Scotland research project focusing on the impact of social media on the Scottish independence referendum.